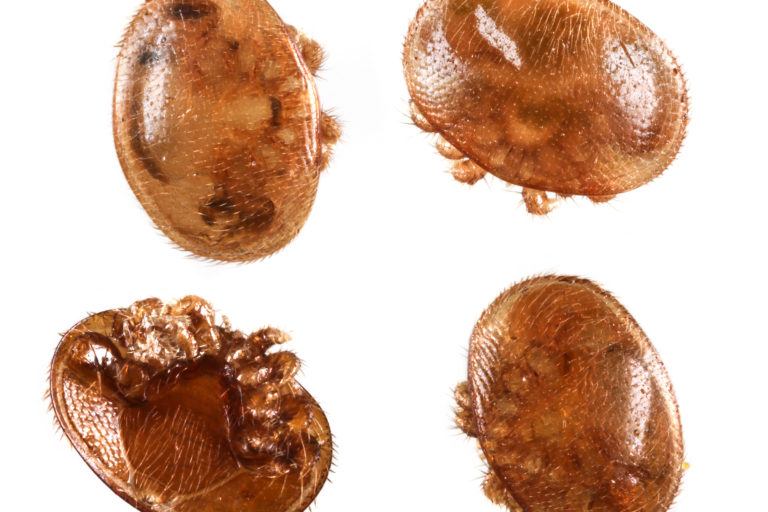 If you are a beekeeper, or if you are considering getting into beekeeping, you will probably have to deal with varroa mites at some point. Varroa mites (Varroa destructor) are an invasive species that started showing up on western honey bees (Apis mellifera) in the United States in the late 1980s. They are relatively harmless in their native Asia, as the eastern honey bee (Apis cerana) has evolved to handle them through better grooming practices. The varroa mite is a parasitic arachnid that can damage a hive in many ways. They are blamed for the elimination of most feral bee colonies in the United States, and they are a major problem for those of us who keep hives. Once the mites latch onto a bee, they feed off of the bee’s blood and can transmit viruses (deformed wing virus; paralysis virus). They can also weaken the bee by leaving open wounds and are a suspect in the search for the cause of the disappearing bees and Colony Collapse Disorder. CCD is a huge problem, especially for crops in California and worldwide.

Best Ways to Get Rid of Varroa Mites

Determine if you have a varroa mite problem. It is probable that most hives have at least a few mites living in them. They aren’t a problem until the population reaches a certain percentage, which is called the economic or action threshold. To know for sure, you are going to have to look for them. Remember, these things are tiny (the size of the head of a pin) and will be tough to spot amongst all of the activity common in a healthy, active hive. We are going to need a sampling methodology. Luckily, there are a bunch of easy, DIY tricks for getting this done. The methods described at the bottom of this article were those recommended to me at the beginning beekeeping class I attended at the University of Minnesota.

Varroa mites prefer drones. This means that they have a weakness we can exploit. The reason that they prefer drone brood is that they take slightly longer to mature. An interesting thing about bees is that the size of the comb (along with pheromones and queen health) decides what type of bee a fertilized egg will produce. The worker comb is between 4.9 mm and 5.7 mm, but the drone comb is between 5.9 mm and 7.1 mm. Add a frame with a larger foundation, and the bees will draw out drone comb. Wait until the cells are capped and then remove the whole frame. Place it in a plastic bag and pop it in your freezer for thirty-six hours. After that time has passed, take it out and allow it to thaw. Scratch the top of the comb with a decapper, and place the frame back in the hive. The bees will do the rest.

Sugar dusting is effective in reducing mite populations on bees. Sugar dusting works by making the bees and hive surfaces temporarily dusty, making it difficult for the little mite’s feet to manage. The bees will also start cleaning themselves and each other (it is sugar, after all) which will dislodge some mites. After the mites let loose, they fall into your trap of choice where they never hurt another bee again. Application is as simple as putting powdered sugar in a clean baby powder bottle and dusting both sides of every frame in your hive. It should be said that this method doesn’t get rid of varroa mites completely. Mites currently developing inside brood cells are not affected, but if used in tandem with other control methods (e.g., drone foundation), it can drastically reduce mite populations.

Commercially available varroa mite traps will help keep mites from climbing aboard another bee. They are also useful monitors of varroa mite populations. Drawer traps eliminate the need to poke around the entrance of your hive or disassemble it every time you want to check for mites. These traps fit under your brood supers, and have a board that slides out like a drawer, allowing easy access to the sticky pad. Closed bottom board traps are essentially a raised, bee-safe screen, under which you place the sticky pad. These are easy enough to make if you have some #8 wire hardware cloth. Measure to fit inside your bottom board, and fold the edges so the mesh sits a quarter-inch from the bottom. Making your own sticky paper is pretty easy, although it isn’t terribly expensive to buy. Paint a 17″ x 14″ piece of tagboard with Tanglefoot Pest Barrier (found at your local landscaping/garden store or sold in a spray can from Amazon) or petroleum jelly.

I plan to never use this sort of stuff. If my hives get to the point where the only way I can get rid of the varroa mites is to gas them out with something that can kill me, then I’m doing something wrong. However, I don’t do this for a living. I have the time to look at all of my hives on a weekly basis. People who have thousands of hives and move them around to pollinate crops don’t have time to keep bees the way I do. I understand that. If you are going to use a product like formic acid or Thymol (Apiguard, Apilife), follow the directions on the packaging explicitly. Always be sure to wear protective gloves, face shield, and respirator when handling these products! Also, remember that these products require specific temperatures to work properly, and that they can negatively affect your honey quality. If you do try this option, you can find

The following method will give you an idea of the varroa mite population in your hive with 95 percent accuracy. To start, collect three hundred bees from the area around the brood frames. Pro tip: a half-cup of settled bees is going to be right around the three hundred needed.

Determine if you’ve breached the threshold. What did you end up with as a result of this equation? If it is fewer than ten, you might be alright for now, as ten percent is considered to be the threshold for hive treatment. If it is getting close to ten and it is still spring, or if it was ten or more, you should definitely be thinking about treating for varroa mites—as soon as you can.

Be a good beekeeper.

The first step in controlling varroa mites is to be a vigilant beekeeper. Periodic hive inspections are important. Are the bees active? Has there been progress since the last inspection? Does the hive still have its queen? What does it smell like? You are the first line of defense against varroa mites.

Through observation, bee researchers have discovered that bees in certain hives are better at cleaning out dead cells than others. They have selectively bred the queens from those hives to produce a line of bees that demonstrate hygienic behaviors. Always buy hygienic queens.

Talk to other beekeepers.

It is always a good idea to have an experienced beekeeping friend or belong to a beekeeping club when you are first starting out. They will know the ropes. It takes a certain kind of person to be interested in beekeeping, and that kind of person needs to be nurtured. I have found that beekeepers are always willing to give me advice.