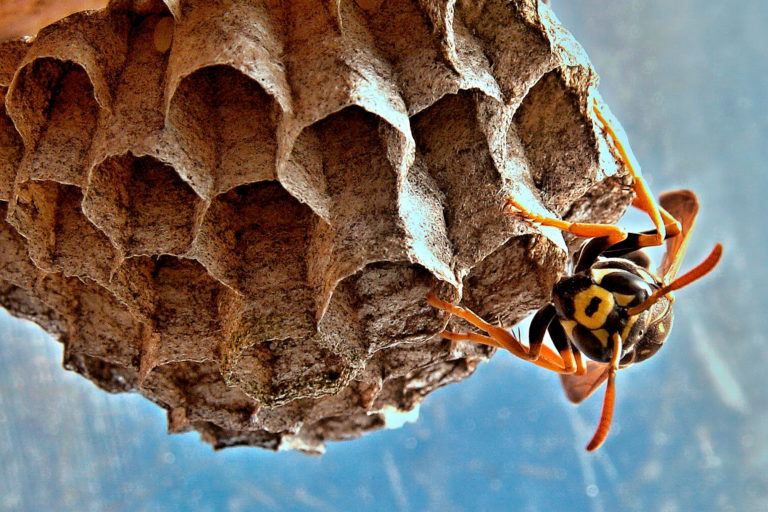 I have found that the best way to deal with wasp nests is to just avoid them by giving them a wide berth. Where I live, the wasps are inactive during the winter months, and it becomes safe to deal with the nests during that time. That advice doesn’t do you much good, however, if the nest is hanging over your front door and wasps are stinging all that attempt to pass through. You need to get rid of that nest as soon as you can—which is probably what brought you here in the first place.

This may seem obvious, but you really need to be careful with this; some wasps are very territorial and aggressive. Their stings hurt like hell and can cause a histamine response or anaphylactic shock. You don’t want to mess with that. So, do your research, know what you’re getting into, and then do it right. Getting rid of a wasp nest can be pretty easy under most circumstances. If you follow the rules laid out in this article you should be just fine. Remember, though, if you ever have an inkling that you might be in over your head, call a professional…and be sure you know your allergies.

Best Ways to Get Rid of a Wasp Nest

First you need to determine what kind of wasp nest it is. What does it look like? Is it big and teardrop shaped and hanging in a tree? It is probably a bald-faced hornet nest. Is it round and flat, with visible comb? Then it is probably some kind of paper wasp. Is the nest oddly or unevenly shaped, is it in the ground? Then you are talking about a yellow jacket. All of these wasps will sting you when you are trying to get rid of their nests. The level of aggressiveness depends on the species: paper wasps are the least aggressive (though will still sting), bald-faced hornets are pretty mean, and yellowjackets are evil incarnate. For our purposes, treat them all as dangerous.

Gather protective gear; the wasps living in that nest are not going to be happy. I know what I would wear if I were going out to do battle with a nest of wasps: my bee suit. I happen to have one because I keep honey bees as a hobby. It works really well. I’ve only been stung once, and it was when I wasn’t wearing the suit and happened to walk in the path of a bee doing her duty, which is collecting nectar and pollen. You can make something similar for free by just layering your clothes, covering all skin, sealing up all possible entrance points with duct tape, and fashioning a hood and mask out of some mosquito netting or window screen. Then find yourself a flashlight; we attack at dusk.

Aerial wasps, like paper wasps or bald-faced hornets, must be handled carefully. Your approach to aerial (up in the air) wasp nest elimination must be decided now. There are a lot of options, but the top two are as follows: poison or no poison. For the first option, you will need to buy a can of projectile wasp killer, aim it at the opening, spray for all you’re worth, retreat, and check back the next day to see if there is any activity. If there is, repeat the treatment. For the no-poison method, you will need a landing net with a garbage bag inside and a long branch trimmer or scraper to remove the nest from whatever it is attached to. Place the bag over the nest, knock the nest inside, and seal the bag. Sounds easy, right?

Use Ordinary Poison for Ground Nests

Ground wasp nests, like those of yellowjackets, require a different approach. As mentioned above, the yellowjacket is one of the most territorial and aggressive of all the wasp species. The bigger problem, though, is that their nests are hidden. The first step in dealing with this problem is to locate the entrance to the nest. Next you need to purchase a can of foaming or ordinary hornet killer. Don’t buy the projectile stuff for this battle. Wait until it has grown darker and cooler in the evening or early morning. With full protective gear and a flashlight, approach the nest slowly, quietly. Insert the tip of the can in the opening and spray, aiming down the hole. Check back later for activity. If there is none, fill in the hole with dirt. If you see some lingering wasps, hit the hole with a second round of spray. You can pick up Raid at Amazon.

Use Sevin Dust for Nests in Walls

If wasps have built a nest inside a wall, they may be tricky to eliminate. That is, unless you want to pull the siding off your house or peel back the roof. I assume the answer to that is “hell no.” That means that we are going to have to do some detective work. Watch where your invaders are entering and exiting your house. Is there more than one hole in the area? Places where siding and edging don’t quite line up, holes in your soffit? Is the nest actually in your roof or attic? Next buy a bottle of Sevin dust and puff as much of the dust as you can into the hole. Then seal it and all other holes up with foam or caulk. Watch the area for further activity, and reapply dust if necessary.

Once you’ve successfully eradicated a wasp nest, you need to think about what it was that attracted the wasp to build their nest there in the first place. Generally wasps are looking for two things in a location: shelter from the elements and proximity to food sources. That is why they build their nests under the eaves of our buildings. There is an insect mesh available with which you can line your eaves and soffits. As for food sources, in the spring and early summer wasps are more apt to go after protein-rich food like decomposing meat, manure, and garbage. In the summer to autumn months they are more interested in sources of sugar, like the can of soda you were innocently drinking that one day when you got stung on the lip.

If you can, leave solitary wasps alone.

They can sting you, like other more social wasps, but it is pretty rare. For the most part, they just want to build their little mud or paper nests and feed their young some dead insects. That’s right, some solitary wasps are beneficial in that they kill pestiferous insects. Some are also good at pollinating plants. You can tell the difference quite easily because most solitary wasps have longer, more drawn-out bodies. They are less aggressive, and there is usually only one of them 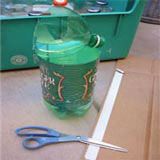 Cut the top one third from a 2-liter soda bottle. Invert it, cap off, so the top is inside the bottom of the bottle. Staple the plastic together at the top and make some holes on either side for a hanging string. Add some sugary soda or fruit juice to the bottom, and hang in a wasp-prone area. The wasps will crawl inside, have a hard time getting out, and, with any luck, die. If you’d prefer not to mess around building one, you can purchase wasp traps from Amazon that have attractant in them.

This product, called a Waspinator, can be found online and in some garden supply stores. It is essentially a grey cloth bag with a vague wasp nest shape. When hung in a normally waspy area, it is said to deter other wasps from flying near what they see as a nest. It makes sense, in a way, but I wouldn’t have it as my only means of control.

This method is only applicable to ground-dwelling wasps like yellowjackets. First, identify the location of their nest. Next, wait until a time when the wasps are less active, like when it is cool and dark in the evening or early morning. Fill the biggest pot you can carry safely with water and set it to boil. When hot, pour into hole.