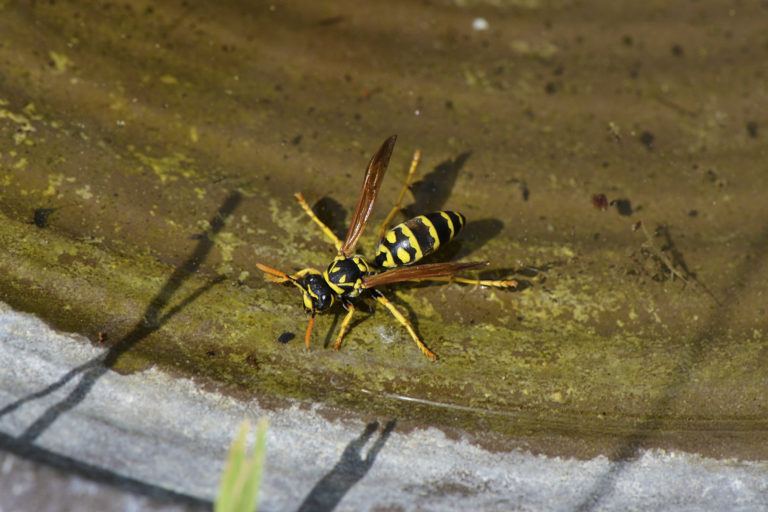 Getting rid of yellow jackets can be a couple things: time consuming or painful, sometimes both. The Yellow Jacket (of the Vespula genus) is perhaps the only wasp that can be considered pestiferous if we take its aggressive colony size and protective behavior into account. This aggression on the part of the yellow jacket genus is most noticeable toward the end of the summer when the colony begins to break down and workers seek out more sugars and sweets to sustain themselves and what’s left of their young. Not only does the yellow jacket wasp’s behavior change toward the end of the warm season, but the size of a colony can be impressively large if left unimpeded.

For the most part, wasps are hunters and rarely scavengers, and this generally applies to yellow jackets as well, but there are particular species within the Vespula genus that tend to scavenge more aggressively than others. Vespula Vulgaris, for example, is one of these scavenging species, and because of their scavenging behavior, they tend to come into contact with humans on a more regular basis than wasps that hunt for live prey. This article will focus on controlling yellow jacket wasp populations first through non-chemical, physical preventative measures. If preventative yellow jacket control cannot be achieved, then the final section regarding direct yellow jacket nest treatment and removal is the final step to get rid of yellow jackets. Keep pet food and other sources of protein indoors. Young yellow jackets, like other wasps, really do enjoy protein, and nothing is packed with more accessible proteins than pet food floating around in a water dish. So, keep your dog’s or cat’s food bowl inside during the warmer months, or find a way to protect that pet food from foraging pests like yellow jackets and other scavenging wasps.

As the yellowjackets age, you will find that they also enjoy a good sugar or carb, especially in the summertime.

Food that yellowjackets particularly seem to go after include:

Keep your garbage cans sealed tightly. Our garbage bins are not only a windfall for stray dogs, stray cats, and the occasional raccoon, but also for yellow jacket wasps who will feed on the leftover proteins and sugars we tend to throw out with the trash. Scraps of meat and fish are particularly pleasing to a yellow jacket’s appetite, as well as old 2-liter bottles of pop, bottles of syrup, and fruits.

Even if your trash bin is empty, it can have residue inside the can.  If that residue is packed with sugar — like leftover syrup or a soft drink that spilled out and dried, it will keep the yellow jacket happy for a long time.  You want to clean the trash bin regularly — just spray it out.

Make sure awnings and siding is properly sealed to get rid of yellow jackets. Preventing yellow jackets from gaining entrance to the voids in the siding and roofing of your home is high recommended because hidden wasp nests are particularly difficult to get rid of and may require the services of a pest control professional. If you can’t stand having wasps living behind your walls, having a professional remove them for you is going to be like a root canal on your wallet. If you’re patient, cold weather will eventually kill the colony, and then you can seal the entrance without driving wasps into your home.

Sweets should not be left out to prevent yellow jackets from gaining access to the sugar. Studies done on yellow jackets show that populations with access to large amounts of refined sugars build incredibly large colonies much faster than colonies whose access to food is restricted to their natural diet of nectar and live prey. If you’re enjoying a soft drink, soda, or anything sweet outside, make sure to keep a lid on it or inspect it for yellow jackets before taking a drink. Or just have water.

Any spill outdoors, such as a soft drink or some ice cream that melted, will have yellowjackets on it in no time if they are in the area.

Mechanical, non-toxic traps are a good way to get rid of yellow jackets. There are a couple of theories surrounding the appropriate timing of yellow jacket and wasp traps, but most experts agree that traps should be put out during the earlier months of the warm season. If traps are set before yellow jacket queens begin their search for proper nesting grounds, it’s possible to spare your community one more yellow jacket colony by killing that one queen. Otherwise, traps set during the first few weeks of summer should keep yellow jacket populations at a manageable level during the peak season. You can find hanging yellow jacket traps at Amazon for a decent price.

Best Ways to Get Rid of Yellow Jackets & Nests

A yellow jacket colony is killed and the nest removed much like any other wasp nest, only most yellow jacket nests are found underground. So, here are some things to consider before you go running out with a can of wasp and hornet killer in a pair of cut off bluejeans and a checkered t-shirt:

You can find a good quality yellow jacket killer on Amazon, made by Spectracide. It allows you to hit the yellowjackets from a distance, and it is made of foam that expands once in the nest or cranny that is home to your yellowjacket. It works great on ground nests, too.  If you just need the little devils gone, this is the way to go.

The do-it-yourself wasp trap is perhaps one of the most effective traps your money doesn’t need to buy. All you’ll need is an empty 2-liter bottle, a scissors, and some sugar water or fruit juice.

This sort of trap doesn’t just trap wasps and yellow jackets, you may also catch flies and bees, or other beneficial insects.So, it might be in your interest to find a yellow jacket trap made for the species of wasp that’s the most common in your area.

Pouring boiling water or just soap water into the entrance of a yellow jacket nest is one way of killing yellow jackets and rendering their nest uninhabitable. Of course, this particular tactic should be done during the late evening, and measures should be taken to cover the skin in case the colony is feeling particularly blood thirsty that evening. If you’re going to use soap water, why not do it with some organic dish soap like Seventh Generation makes.

Sure, you’ll still be the Tamerlane of the wasp world, but at least you’ll be remembered as the environmentally friendly murderer of wasps.

Does a yellow jacket die when it stings?

No. A yellow jacket has a smooth stinger. Think of it like a fish hook without barbs. Because of this, it can sting as many times as it wants — and sometimes it will sting the same person several times within a few seconds. It does not die when it stings someone.

Yes, but not very good ones.  It is a hard question to answer, because people want a firm Yes or No on if certain bugs are pollinators. The fact is that a yellow jacket probably does some pollination as it feeds, but compared to the honeybee or bumblebee, it does very little pollination.  As a result, we don’t really consider them prolific pollinators worth protecting.