I absolutely hate ticks. Just look at them! Ish. I am so grossed out by them that it’s actually hard for me to touch them, even to dislodge them from my skin (or my dog’s skin). It’s a strange internal battle, but you best believe that get them off I do—and quickly. I avoid them like the plague, which is good, because you can catch it from them. Well, not the plague per se, but they can carry diseases like Lyme’s, ehrlichiosis, and several types of fever named after various geographic regions. Really, the best way to avoid ticks is to never venture into the outdoors, but that would make me one sad person, and I know I’m not alone there. So instead we must learn how to control and remove ticks, stay informed about which types are dangerous, and know the symptoms to look out for that signal a tick has infected you…and then prepare how to get rid of them.

These are the bad ones; many call them deer ticks. As adults, males are only an eighth of an inch long; females are slightly larger. They have eight black legs, with a black head and a black spot high on their backs. The rest of the back is light brown.

Between an eighth and a quarter of an inch long as adults (only slightly larger than black-legged ticks), these are brown all over, and females have a white spot in the middle of their backs.

Larger than the other ticks, these are around a quarter of an inch long. Primarily brown in color, females have a white/tannish section on their upper backs, and males have tan and brown mixed about their backs. 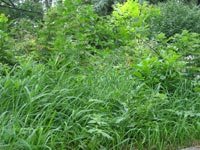 This means be aware when you’re entering a tick-infested area, and wear proper clothing and bug spray when you do. First off, don’t freak out about ticks every time you step out the front door. They like wooded, tall grassy areas. When you’ll be going somewhere like that, cover your skin with pants, tall socks, boots, long sleeves, etc. If it’s too hot for that, load up on bug spray. Even if you wear all that clothing, it doesn’t hurt to spray down for some added protection.

The good news is that many of these habits will not only prevent ticks, but will help you avoid and get rid of poison oak, poison ivy, and other nasty risks from long grass and brush.

When you come in from an outdoor adventure, check for ticks immediately.

Actually, this step should start before you’re even inside. Check your clothing for ticks first, and shake them off outside if you see any. Then head inside, strip down, and look everywhere—especially under arms, in hair, near your belly button, around ears, and between your legs. Have a friend/significant other help you out. Remove ticks ASAP. If it’s latched on already, be sure to pull its mouth out too. Don’t squeeze its stomach because that can cause its diseased fluids to squirt out. Gross. 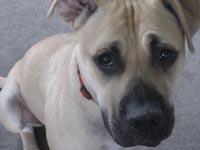 It’s important to keep pets safe from tick bites, too.

This is for Fido’s health as well as preventing him from tracking the things into the house. Tick safety for animals starts with prevention; use Frontline or something similar to keep fleas and bugs off. Veterinarians offer Lyme disease vaccinations for animals; this is a great idea if your dog is in the woods or weeds a lot. Check your pet for ticks frequently. Pull or brush the fur back to see the skin and find them. Carefully pull them off if you find any. Amazon sells Frontline (like this one for 5 to 22lb dogs) for a variety of kinds and sizes of dogs. 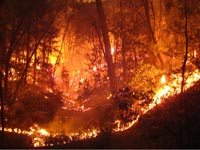 Once you’ve pulled off the tick, dispatch that sucker to the next life.

Usually I try to give bugs another chance by releasing them back outside if they bother me, but not so with ticks. They die, and there are many options for their disposal. You can burn them (in a campfire or carefully with a match), smash or rip them (not with bare hands, though), flush ’em down the toilet . . . however you see fit. It’s a good idea to toss clothes or blankets that may have ticks on them in the dryer, as they won’t survive that treatment. 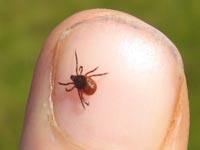 Know tick-borne disease symptoms and which ticks are the most dangerous.

For the most part, ticks are harmless. Black-legged ticks (commonly called deer ticks) are the ones to watch out for, and one is pictured to the right. Check the sidebar for tick identification; you’ll also find detailed info on Lyme disease symptoms there. In general, a tick bite does not equal a visit to your doctor’s office. Not that you can’t go if you want to, but really, you only need to be checked out if you get a fever, rash, or flu-like symptoms soon after the tick bite.

Getting Rid of Ticks on Your Land

If you are trying to reduce the number of ticks living on your property, there are a few steps you can take. First off, know what kind of habitat ticks like and then try to create the opposite. Ticks live in grassy, wooded areas that have lots of wildlife nearby for them to feed on. Obviously you shouldn’t go cutting down an entire forest just to rid yourself of some ticks, but if you have lots of brush, long grass, or weeds around, your first priority should be getting rid of it. One way to do so is the nuclear wipeout option of putting plastic sheeting over the area to block out the life-giving rays of the sun. No grass/weeds, no ticks hanging on them.

Clear out the area if at all possible; you could have a party and have a bonfire, or you can compost the unwanted brush and grass. No overgrown plant life means no deer and whatnot, which means ticks have no home or dinner. Your other option is to spray acaricide (an insecticide for ticks) over the area, or you can combine it with brush removal. This can be a DIY project or professionally done. A rather effective approach, only spraying once in the spring can lower the number of ticks by seventy percent or more for the rest of the season.