Boxelder bugs, also spelled “box elder”, (Boisea trivittata) belong to the true bug family Rhopalidae. They are a harmless nuisance pest, and arrive in both the spring and fall seasons. In the spring, they emerge from their overwintering spots to begin breeding again. The first batch of nymphs arrives around 11–19 days later. In the fall, box elderbugs congregate on south facing walls of structures in preparation for winter hiding, and emit an odor to attract other box elder bugs to their location.

Boxelder bugs also have a knack for working their way indoors, through the smallest of cracks around windows or doors. They are nearly impossible to keep out of older homes.

Take the offensive, and attack the fall boxelder bugs to keep them from becoming spring boxelder bugs. Offense is the best defense. 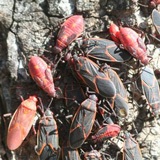 The larger black and orange boxelder bugs are adults. The smaller, all red ones are nymphs.  The boxelder bug is always some combination of black and orange (some would call it red). Some have more orange, some have less, but for the most part they retain the same color wherever they are.

They should not be confused with stink bugs, which look a little similar but are found in the southern USA. Stink bugs, as the name suggest, also give off an even more unpleasant odor than the boxelder bugs.

And while boxelder bugs might have the same general coloring as ladybugs, they are different.  But, it should be noted that the methods used to control boxelder bugs are similar to the best ways to get rid of ladybugs.

Best Ways to Get Rid of Boxelder Bugs

Use a spray insecticide to kill outdoor boxelder bugs.

We are not fans of telling people to use insecticides, but sometimes you need a solution that really is going to work. No matter how safe a manufacturer claims that an insecticide is, any pesticide by definition is toxic, and anything that is toxic could adversely affect humans.

It’s really only worth spraying insecticide on your house when you have large clusters of boxelder bugs gathering around. A proper insecticide, like CyKick CS or Cynoff WP, contains the organic compound pyrethrin. You can also spray a product around the perimeter of your house, such as Cyonara LP, NiBan, and Demand G. Or just grab some Raid and go to town on those little buggers. Amazon has niban in a 4lb shaker for a reasonable price.

Use insecticide in crevices and cracks to kill boxelder bugs.

If you have a problem with boxelder bugs getting in your house, make sure you get some insecticide in any cracks and holes around the windows and doors. That is where they are probably making their homes, and they will come out again when it is their season in the spring or fall.

Aerosol sprays like Invader HPX, Air-Devil HPX, or Microcare, or dusts like Drione, boric acid, or diatomaceous earth are all excellent options. Of course, if you just sealed up those holes you wouldn’t have to do this at all.

Prevent boxelder bugs from getting inside by sealing your house.

In the fall, boxelder bugs are congregating to find a place to overwinter. If they are collecting on the southern wall of your home, they are going to try to get inside. Seal up your house using caulk, cement, wire mesh, netting, or whatever else you might have handy. Make sure to do it before the end of summer before the bugs crawl inside.

Keeping your house bug free means sealing even the smallest of cracks and crevices. A boxelder bug can get in through tiny cracks around your foundation, windows, and doors. The good news is that sealing these cracks may not only help against boxelder bugs, but could also help prevent the intrusion of mice and other bugs.

Suck up boxelder bugs inside.

Use a strong, sealed vacuum unit to suck up boxelder bugs inside your home. They stink, so don’t smash. You will want to get rid of them as quickly as possible, since they emit an odor that attracts more box elderbugs. Find out how they are getting in and seal it up tight, or else you will be vacuuming them up all winter long.

There are also several small, inexpensive vacuums built specifically for sucking up bugs.  They work very well on boxelder bugs, but are also great on everything from spiders to ants to crickets. They are great because they typically include a long shaft for getting to the bugs where they are, and an LED light for easily locating the bugs.  We like this one, which can be found on Amazon.

Traps are useful for catching and killing boxelder bugs in hard to reach places like ceilings, basements, and crawlspaces. There are many types of traps available, and the best make use of lights or stickiness. A glue board can be placed and used for many weeks to catch boxelder bugs, with the added bonus of not requiring electricity like light traps.

Some people do not like of glue board or traps, because it causes a long, slow, and potentially painful death for whatever it catches. Factor this in to your decision process.

There are so many types of insecticides on the market that it is good to take a moment and encourage you to find out what your active ingredients are before you spray it all over your home. The active ingredient is always listed on the bottle, and right near that should be a warning label that will give you some idea of what not to spray it on. Usually spraying it in moist areas like eyes and mouths are not advised. You may also want to ask the sales clerk to provide you with the MSDS (material safety data sheet). This sheet of legally required information is the quickest way to find out if this particular pesticide will harm you, your kids, or your neighbor’s dog. If you are truly concerned about spraying deadly toxins into the air, check out the section below.

These soaps are effective at removing the cuticle of the boxelder bugs, leading their death. However, the soap must be sprayed directly onto the bugs. As it has no residual effects, this makes insecticidal soap effective at getting rid of dense clusters of boxelder bugs, but little else. If you do want to try this option, you can try Safer Insecticidal Soap (which you can get at Amazon)

Pyrethrins are a derivative of the chrysanthemum flower, and have great power as a residual insecticide. They come as sprays, powders, dusts, and aerosols. So if you spray it on the building, it should keep bugs off for several days, unless rain washes it off.

Note that pyrethrins are some of the most devastating chemicals for bees, and we like bees. Make sure that you are using the chemicals sparingly.  The last thing you want to do is kill a bee colony just because you are trying to get rid of some harmless boxelder bugs.

Removal of the boxelder tress (acer negundo) is drastic, but will keep boxelder bugs away. The bugs are particularly attracted to the seeds, so removing the seeds in the fall can also help reduce their numbers and make your life a bit easier.

The added benefit of removing boxelder trees is that they are really not very nice trees to have around anyway.  They break easily in storms, and are usually considered invasive.

There are many home remedies for boxelder bugs. They range from using vinegar to other kinds of cleaning agents.

One of our favorites is the simple soap-based DIY solution for boxelder bugs, featured by the Tick and Mosquito Project. Other variations of this may work similarly well.

Whatever home remedy you use, if you come up with one that works well, please leave your thoughts in our comments, for the benefit of other readers!