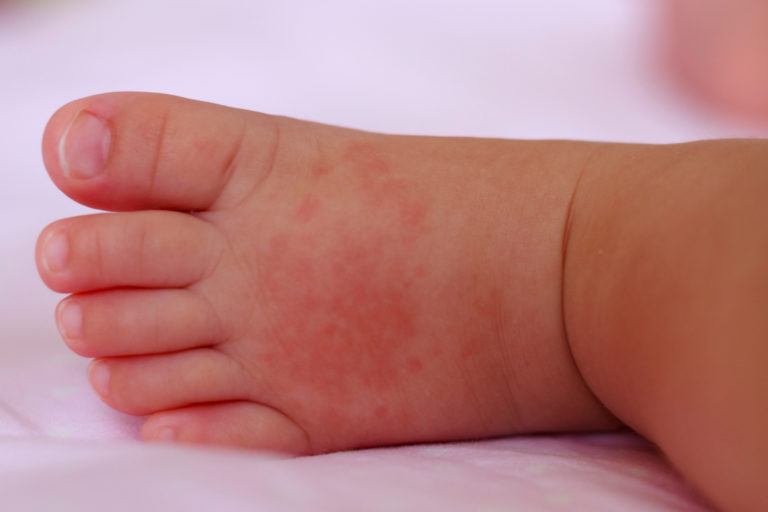 Heat rash isn’t fun. I would like to say it always happens at the worst time. But, as it turns out, there is simply no good time at all to develop heat rash. Heat rash is a ridiculously common malady that will more than likely hit everyone at some time in their life. It’s actually most likely to happen just before (or during) a nice tropical bikini/banana hammock wearin’ vacation. Or, failing that, some random time when you’re just hoping to look all hot and stuff. Let’s face it: Not only is heat rash incredibly uncomfortable, it’s quite ugly and embarrassing. Heat rash may also show up as inner thigh burn, also known as chub rub.

I guess if we’re all gonna end up getting heat rash at some point, we might as well know what it is. Heat rash; also known as prickly heat, prickly heat rash, miliaria, or red miliaria; is the result of clogged pores. Pores become clogged with sweat, dead skin, and bacteria (often of the Staphylococcus epidermidis variety). Once this has happened, sweat has no choice but to seep its nasty way into the skin rather than onto the skin. Generally this happens at places on the body where skin meets skin such as armpits, the groin, between thighs, and under breasts. However, it’s not uncommon for heat rash to develop on the back, face, abdomen, neck, chest, and at the hairline. Most of the time, if you treat it properly, heat rash will go away on its own. But you want it gone now. Well, that ain’t gonna happen…sorry. But keep reading, there’s a pretty good chance you’ll find some useful advice on how to get rid of heat rash a little faster.

Best Ways to Get Rid of a Heat Rash

Get out of the heat

The first step in getting rid of heat rash is, of course, to go someplace cool. The moment you notice heat rash developing, stop doing whatever it is you’re doing and get to somewhere with some air conditioning. Failing that, get into a shady place and sit your ass down ’til you cool down. While you’re at it, get yourself something to drink, like fruit juice with all its good vitamins, or at the very least get some good ol’ fashioned water. Do not touch the heat rash. That will irritate it further.

If you leave all the nastiness that has built up on your skin right where it gathered, the clogged pores that are causing you problems aren’t gonna stand a chance in hell of getting better. So take a cool bath and add one of the following to the water: 1 cup of ground oatmeal or 3 tbsp of baking soda. Whatever soap or bubble bath you use, just make sure it is not deodorizing. If, for some dumb reason, you are opposed to baths, take a cool shower. And again, use non-deodorizing soap. When it comes time to dry off, air drying is best, but if you lack the patience, then pat yourself dry. Don’t rub.

It’s very important to allow as much skin-to-air contact as possible. Heat rashes love moisture. The drier you are able to keep your skin, the better. If you can sit next to (or under) a fan, do so. It is also helpful when treating heat rash to apply a cold compress. Just make sure that whatever you use is wrapped in a towel. If you notice the least bit of moisture in the towel from condensation, replace it immediately.

Whether you are trying to avoid getting heat rash to begin with or are working on a heat rash treatment for your current ailment, it is important to wear the proper clothing. Stick to natural, breathable fibers like cotton and avoid synthetic fabrics like polyester. If you’re a dude and are suffering from a little heat rash in the balls region, avoid wearing tighty whiteys. Throw on a pair of boxers and avoid having your junk mashed against your body. Definitely change your clothes if you do develop heat rash, as sweaty clothing will exacerbate the problem.

If you’re unlucky enough to have to buy something to treat heat rash with because you’ve got some intense itching going on, you’re actually in luck. All you need is a little calamine lotion or hydrocortisone cream (like Cortaid, sold at Amazon). These usually take care of the itch and, as you know, are available anywhere. You’ve probably already got some in your medicine cabinet. If the itch is really bad, don’t be shy about going to your doctor for a little something extra.

Under most circumstances, heat rash will go away on its own without any medications. Yeah? So? Just because it will go away without help doesn’t mean it should. If you have the prickly heat, you are in some serious discomfort and want something to help diminish that discomfort right effin’ now. Some of the best and most common heat rash remedies out there are nothing more than the powders you’ve probably already got either in your kitchen cupboard or your bathroom cupboard. After you’ve gotten out of the heat, have taken a bath, and dried off properly, powder your dainty little ass (or wherever) with some corn starch, baby powder, talcum powder, or some good old Gold Bond Medicated Powder (or anything of the like). And like I said in the last step of the section above, if you’ve got some really serious itch going on, get yourself a light steroid cream (something with hydrocortisone), like Cortaid, Cortizone, or Aveeno 1% Hydrocortisone Anti-Itch Cream.

This plant needs no introduction. Chances are either you or someone you know has a live one sitting around the house somewhere. Simply break the tip off of one of the spikes, squeeze the aloe onto your hand, and gently rub it over the affected area. This natural heat rash cure will start soothing the pain almost immediately.

The oil from both of these plants is said to have cooling properties, and both oils are frequently recommended as heat rash remedies. You can either apply the oils directly to the skin or add a few drops of either, or both, to your bath water. You can get both kinds of oils from Amazon, like Radha Lavendar Oil.

If heat rash hits when you are out hiking, biking, or running in the woods, look for jewelweed (a.k.a. Touch-Me-Not). They are generally found in low-lying or wet areas like next to lakes, ponds, streams, or rivers. Collect it, crush it up, and apply gently to heat rash.