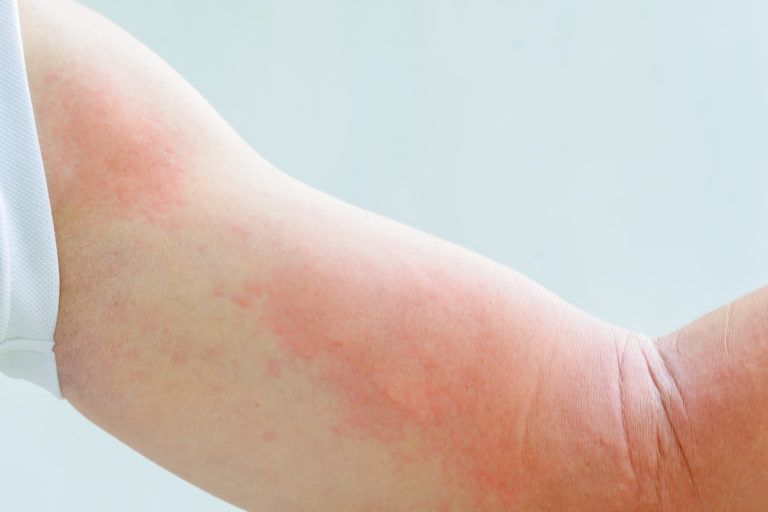 A rash is a word used by doctors to describe a reaction that changes the color, appearance, and feel of skin. It is not one specific thing. Rather, it is a wide range of things, and it can be caused by a host of illnesses, diseases, allergens, and medical conditions. Being that a rash has many possible causes, there are likewise a large range of treatments. To diagnose a rash properly, you may require the assistance of a dermatologist, especially since some rashes are merely symptoms of a much larger and potentially life-impacting problem. On the other hand, many rashes simply require a little care and time to heal.

Rashes can be localized to single part of the body or affect the entire skin surface. These rashes may affect the skin in many different ways: the skin may change colors, become itchy, bumpy, dry, cracked, swollen, and/or blistered. In all rash cases, scratching the itch will make things worse, so often some sort of antihistamine or hydrocortisone cream is used. Below I have described for you many of the common rashes. Below that are the most common treatment regimens for each cause. There may be a lot of similarity between the rashes. So if you’re not sure which one you have, consult a doctor, specifically a dermatologist.

Rashes are the primary symptom of several medical conditions. Rosacea and psoriasis are two medical conditions where rashes will manifest regularly. But there are other cases where a rash may just be a symptom of a larger illness at work. In those cases there will be additional symptoms to help you identify the problem. Here are the most common:

What Kind of Rash Do You Have?

These are rashes caused by allergens, irritants, or sunlight. It manifests as a localized rash or irritation of the skin when skin comes into contact with one of the aforementioned substances. The rash and/or blister is only present in the epidermis and the outer layer of the dermis. Contact dermatitis will begin to fade away in a few days after the irritant is removed. Common irritants are soap, detergents, and skin-cleaning products. And common allergens are drugs, poison ivy plants, poison oak plants, and poison sumac plants. Contact dermatitis rashes are large, burning, and itchy.

They can take several days to several weeks to heal, and you often get them at a bad time, when you are out in the wild away from a drug store. It is easier to avoid poison oak, for example, than to try to get rid of poison oak rash. Same goes for other contact dermatitis varieties.

There are a large number of rashes caused by viruses, fungus, parasites, and bacteria. Chicken pox is caused by a virus called varicella zoster. When we get older the virus can reactivate and cause shingles. Scabies, swimmer’s itch, and fleas are all caused by parasites. Ringworm and athlete’s foot are fungal infections. Impetigo is an extremely contagious rash caused by a bacterial infection. Christmas tree rash (pityriasis rosea) and lichen planus have unclear causes. They could be caused by a virus, allergy, or even stress, but so far no pathogen has been isolated as the definite cause.

Miliaria rubra (sweat rash or heat rash) manifests itself as small and itchy rashes. Miliaria, or heat rash, is common among citizens of hot and humid climates. Heat rash occurs when the ducts of sweat glands get plugged with dead skin cells or bacteria (staphylococcus epidermis). The trapped sweat causes irritation, which leads to itching and then to a rash of small blisters. These small blisters called papules may itch and also cause an intense “needles and pins” sensation. They may also manifest on a number of different areas on the body, most commonly the face, neck, chest, stomach, and under breasts, the scrotum, or other skin-folding areas of the body. Click here to read the full article on How to Get Rid of Heat Rash.

Intertrigo is an inflammation of the skin of and around body folds. That is to say places where skin folds back on itself. The condition is caused and made worse by heat, moisture, friction, low air movement, and maceration. Maceration is what happens to skin when it is constantly wet; it softens and turns white, which makes it susceptible to infection. The inflammation is frequently worsened by an infection of the rash by yeast, bacteria, fungus, or virus. Intertrigo usually occurs around abdominal folds, under breasts, and in the genital area. Intertrigo most commonly affects people with either obesity and/or diabetes. Intertrigo in babies is called diaper rash. Click here to read the full article on How to Get Rid of Diaper Rash.

Eczema is also known as atopic dermatitis. Eczema manifests itself as extremely itchy, thickened patches of dry skin. Typically eczema affects the skin behind the knees and in the folds of elbows. The itching sensation is extremely intense and can drive some people mad. Babies and children with eczema sweat more than normal. And most infants with eczema come from a family with a history of having allergy-related diseases such as hay fever or asthma. Eczema is very irritating, but for most people, it is only a temporary problem. In some rare cases, it becomes a serious problem. Click here to read the full article on How to Get Rid of Eczema.

If you are able to identify the irritant or allergen, remove it and cease all contact with it. If you are unable to locate the source yourself, see a doctor. To relieve the itching, try applying a paste made of baking soda and water, or soaking it in epsom salt. If that doesn’t work, use a hydrocortisone cream. Don’t put anything with alcohol in it on the rash, as alcohol will make it itch more. Cover open blisters with sterile gauze, and keep the wounds clean. If you have severe contact dermatitis, see a doctor for a prescription of antihistamine.

For chicken pox, keep the kid clean and dry. Use a topical barrier ointment or lotion containing zinc oxide. Keep the fingernails trimmed short to reduce damage done by scratching. To relieve the itching, an oatmeal bath may be of some help. Chicken pox will run its course in about a week. Shingles, on the other hand, is a much more painful experience. It is something that you will have to seek some medical attention for. The doctor will prescribe an antiviral to shorten the time of infection. If the pain is bad enough, the doctor may even prescribe some painkillers.

To treat scabies, doctors will prescribe an ointment with a 5% solution of permethrin, malthion, or lindane lotion. Permethrin is the preferred topical ointment. Apply to skin before bedtime and leave it on for 8‒14 hours. Sulfur, neem oil, and tea tree oil are also used to treat scabies, but they don’t seem to be very effective.

There is no treatment necessary. It will go away in a couple of days. Just try not to scratch it too much. Use a lotion or cream to relieve itching.

Use an anti-fungal treatment like miconazole, terbinafine, clotrimazole, ketoconazole, and tolnaflate. Apply twice daily for a couple weeks until it goes away.

The doctor will prescribe the use of a topical or oral antibiotic. Also, wash the impetigo with soap and water, and keep it dry.

This usually resolves itself in a few weeks. Just don’t scratch it. If it lasts for over 6 months, go see a doctor.

This is only serious when it’s inside your mouth. See a doctor in these cases to reduce symptoms and help heal the lesions.

The rash will go away on its own if you keep the area clean, cool, and dry. Also avoid tight-fitting clothing.

Keep the rash clean, cool, and dry. Use a baby diaper rash ointment like Desitin. If the rash persists for several weeks, see a doctor. You may have a secondary infection.

The major problem with eczema is that it itches like crazy. So the focus of treatment is to relieve this itching through the use of a hydrocortisone cream and an antihistamine. It will also be important to keep the skin moisturized by using an oil-based lotion. For children with eczema, bathe them no more than 3 times a week using a bath oil. And keep their fingernails short to help decrease the amount of damage caused by scratching. To reduce inflammation, apply a corticosteroid cream or ointment. For severe cases the doctor may prescribe an ointment with coal tar in it. This may help, but it will be very messy and stinky.

Benadryl is an antihistamine sedative that relieves itching associated with allergies, hives, and rashes. An antihistamine reduces itching and swelling by blocking histamine, a chemical released in the body that contributes to inflammation. You can get Benadryl at Amazon.

Calamine is a mixture of zinc and iron oxide, the main ingredients in calamine lotion. The lotion is supposed to help reduce itching caused by sunburn, poison ivy, eczema, chickenpox, and other rashes. The FDA says there is no proof. But what do they know?

Most rely on zinc oxide as their main ingredient, so it’s pretty much calamine lotion without the iron oxide.

What else can I say about tough actin’ tinactin? It stops athlete’s foot dead. And it’s sold on Amazon!