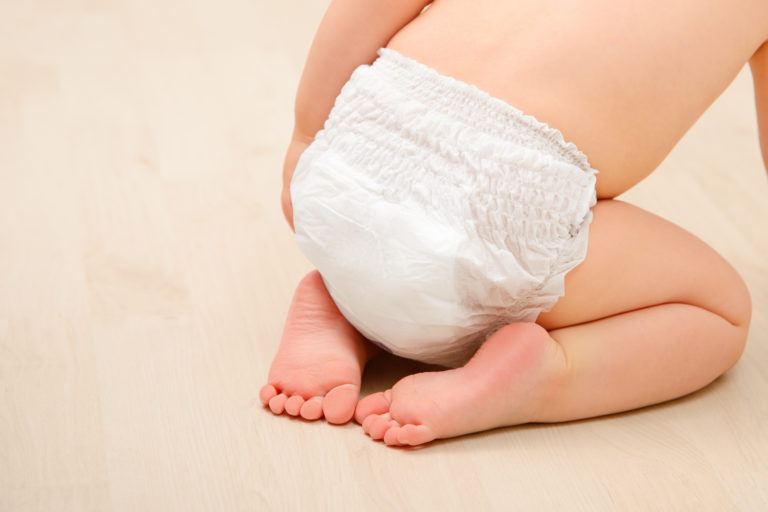 When I was a kid, I loved amusement parks. I loved them right up until the moment I went on the log flume—the ride with all the waterfalls and the giant splash at the end—and then had to walk around for the next hour with five pounds of wet, chafing, denim shorts. And that’s kind of how I imagine diaper rash; after all, one of the causes of diaper rash is a wet diaper rubbing on a baby’s skin. But there are more factors at work with diaper rash than just water and cloth, so it can’t quite compare to any chafing we’re familiar with as adults. Urine and poop both contain acids that can break down the outer layer of a baby’s sensitive skin, and once the rash develops, it can be exacerbated by exposure to bacteria or the chemicals in baby wipes. An unhappy baby leads to unhappy adults.

There’s good news here, though. For one thing, your baby’s diaper rash does not mean you’re doing anything wrong as a parent. Diaper rash is one of the most common baby rashes because it’s really just a normal result of wearing a diaper, although there are some things you can do to minimize its occurrence. The other good news is that curing diaper rash can usually be done at home in about 24 hours, without needing to take your baby to the doctor.

What is Diaper Rash?

Generally speaking, diaper rash is a red, basically flat irritation to the skin in the diaper area. This most common form of diaper rash is caused by the combination of moisture, chafing, and acidic chemicals in urine and stool. It occurs most often between the ages of 8 and 12 months, when changes in a baby’s diet change the chemical composition of her urine and feces. Younger babies seem less prone to diaper rash when they are breast-fed rather than formula-fed, and when the breastfeeding mother doesn’t overdo acidic foods. Babies wearing cloth diapers may be more at risk of diaper rash, since absorbent gels in disposable diapers minimize the skin’s contact with urine. So that may be an easy change.

But some diaper rashes aren’t so simple. Bacterial diaper rash results when the “regular” rash becomes infected. Fungal diaper rash is the handiwork of the intestinal yeast Candida albicans, and sometimes springs up when antibiotic medications create an imbalance of bacteria and yeast in the intestines. You may be able to prevent this by adding yogurt to your baby’s diet when she is on antibiotics. Finally, diaper rash can be the result of an allergic reaction to disposable diapers or wipes, or to laundry detergent used on cloth diapers. Food allergies may also cause a red ring around the anus.

Change diapers as soon as they are wet or soiled–every hour or two, for some babies. This is important for both preventing and healing diaper rash, since sitting too long in the moisture and acidity of a dirty diaper is the most common cause of diaper rash. Also, bacteria quickly multiplies in urine or feces once it leaves the body, and if you allow this bacteria to remain for too long in contact with skin already irritated by a diaper rash, you’re opening the door to infection.

Reduce irritation by using plain water instead of wipes. The easiest method of using doing this is to collect lukewarm water from a bowl using a bulb syringe, then squeeze a small amount of the water over the diaper area. Finally, wipe gently but thoroughly with a soft washcloth. You may also wish to wipe a second time with a fresh dry cloth, since you should always make sure your baby’s skin is completely dry as well as clean before putting on a diaper.

Let your baby go without a diaper for short periods of time. This gives the rash a chance to dry out and may also provide your baby with some temporary relief from the pain of a diaper rubbing against the raw skin. To guard against accidents, you can put a blanket or towel on top of a waterproof pad on the floor. Some parents use talcum powder to dry the rash, but most experts don’t recommend this, since it can easily be inhaled and irritate an infant’s lungs.

Try different kinds of diapers to see if another brand will fit better and rub less on your baby’s skin. Some brands of disposable diapers are also more absorbent than others, and may reduce the amount of moisture against the skin. On the other hand, some brands of diaper contain fragrances that can cause irritation in babies with very sensitive skin. If you use cloth diapers and your baby is prone to diaper rash, diaper liners will increase absorption, and using breathable covers instead of plastic pants will reduce humidity inside the diaper.

In most cases, an over-the-counter or home remedy for diaper rash will take care of the irritation quickly and easily. But not all diaper rashes are alike (see left sidebar), and some diaper rash symptoms point to a problem that needs more aggressive treatment or even a pediatrician’s attention. Severe diaper rashes can be treated with a combination cream like Triple Paste or Butt Paste. These may be hard to find, but you can make something similar by mixing zinc oxide, petroleum jelly, acid mantle (if you can find it—otherwise, you can substitute Lansinoh), and aluminum acetate. Or, if you prefer, your pediatrician can give you a prescription for strong diaper rash medicine. It’s a good idea to take your baby to a doctor anyway if you notice symptoms of a severe diaper rash—that is, if the rash blisters, peels, bleeds, or oozes fluid. Your pediatrician should also be involved if the rash spreads, gets worse, fails to heal in 4-7 days, or if your baby also has diarrhea for more than two days. If you think the rash may be the result of an allergy, a doctor can help you determine what the allergen is. You may be able to recognize a yeast diaper rash yourself by noting its small white bumps. This requires treatment with anti-fungal medication, and over-the-counter Clotrimazole cream usually works well.

One last thing about diaper rash: it can’t possibly be comfortable. Many of the diaper rash products named here will soothe as well as heal the skin, but in the case of a severe rash, you may wish to use 1% Hyrdocortisone cream to treat the symptoms. This is not a cure for diaper rash itself, but it may help to calm a fussy baby. However, because it can damage the skin if overused, it should only be used for a few days at a time and—you guessed it—under a doctor’s supervision.

If you use cloth diapers, adjust your laundry routine to reduce potential irritants in the diapers: pre-soak the diapers, use hot water and gentle detergent (like Seventh Generation Baby Detergent, sold at Amazon), and double rinse.