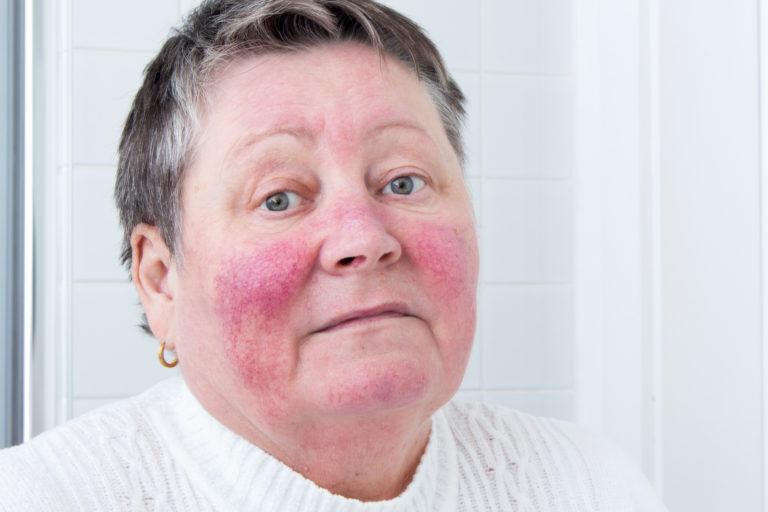 Rosacea is an inflammatory skin condition that primarily affects the face. The traits of this condition—redness of the face, red nose, flushed cheeks, and small red or pus-filled bumps—are frequently mistaken for acne. Rosacea is occasionally referred to as adult acne or acne rosacea, but actually rosacea has little to do with the pimples and blackheads that so commonly affect teens. Rosacea can either be a progressive condition or, more commonly, a cystic condition. Having cystic rosacea means that it will affect you for a period of time, lessen in intensity, and then flare up again. It can cause quite a bit of social anxiety, so knowing how to handle it is important.

Rosacea primarily affects fair-skinned adults between the ages of 30 and 60. Rosacea is more common in women than in men, but men are more likely to get a severe form of the condition (rhinophyma). Rhinophyma is a bright red, swollen nose. It is commonly thought that this condition was caused by alcoholism, but this is not true. Although alcohol can aggravate the condition, it is caused by rosacea. Alcohol aggravates rosacea by causing blood to rush to the vessels near the skin’s surface (aka flushing).

Avoid things that cause blushing and flushing:

Signs and symptoms of rosacea may begin as an affinity to blush easily and eventually become a constant redness in the center of your face. The redness comes from dilation of blood vessels close to the skin’s surface. As the symptoms persist and worsen, the vessels may become swollen to the point of visibility (telangiectasia). Small red bumps appear across your face; these can be mistaken for acne. In severe cases, the oil glands (sebaceous glands) become enlarged and cause a build-up of tissue on the nose (rhinophyma). Half the cases of rosacea also manifest themselves in the eyes (ocular rosacea). The eyes will feel gritty and dry, and the eyelids may be inflamed and appear scaly.

Diagnosis for rosacea should be conducted by a doctor. Because of the highly progressive nature of rosacea, early diagnosis is extremely important. If you experience persistent redness on your face, see a doctor or dermatologist. They will be able to determine the cause of the redness. Sometimes cystic acne or skin allergies can be confused for rosacea or vice versa. Don’t try to diagnose yourself for this condition. The longer the rosacea goes untreated, the worse the potential damage to your face could be.

Corrective surgery is sometimes used to improve a patient’s appearance after initial treatment of the symptoms of rosacea. The enlarged blood vessels, redness, and excess tissue on the nose may become permanent. Using laser surgery or electrosurgery, doctors will be able to remove and correct some of the damage caused by rosacea. Photorejuvenation can also be used to help reduce some of the damage caused by rosacea. It works by inducing wounds to the skin, which trigger the body to replace the damaged skin with new skin. This process is also commonly used to remove wrinkles.

While the doctors treat your rosacea symptoms, it will be important for you to reduce the potential for flare-ups by avoiding things that trigger them. Some things that may cause a flare-up are as follows: sunlight, winter weather, excess face touching or rubbing, facial products that contain acids or alcohol, clogged pores, stress, and hot weather. So, basically, move into your basement and don’t touch your face. Everyone with rosacea has different triggers for flare-ups. It is important for you to determine what causes yours and completely avoid it/them. Keeping a journal of the outbreaks will help you track those triggers.

Successful rosacea treatment is going to involve the help of a professional and a concerted effort to avoid flare-ups by you. Many people living with rosacea are able to maintain a good quality of life. The key to treatments is to get started as soon as possible. Some very famous people live with rosacea including Bill Clinton, Renée Zellweger, Rosie O’Donnell, and Mariah Carey. You have the same access to the treatments they use for their rosacea. There is no cure for rosacea. But, with continued use of treatments and avoidance of the triggers that cause flare-ups, you should be able to lead a normal life. And for those with skin damage caused by rosacea, either because they contracted a rare form or were unable to seek medical treatment right away, there are corrective surgical options. Progress is being made on determining the cause of rosacea. So far it is believed rosacea is a combination of genetic and environmental factors. So the key to controlling rosacea (at least until a cure is discovered) is to control the environmental factors, which basically means avoiding products, situations, and other things that cause you to get red in the face. Blushing is not exactly an easy thing to control; it is a involuntary reaction after all. But still you must try to avoid it.

Sulfur has become a very common treatment for rosacea. It is the primary line of defense prescribed by many physicians. In some studies, it was actually more effective than oral antibiotics. It is also a lot easier on your body than antibiotics. Sulfur has natural antibiotic, anti-fungal, and anti-inflammatory properties. You can get Sulfur Powder at Amazon.

Salicylic acid has natural anti-inflammatory properties that make it an ideal alternative to other expensive options for the treatment of rosacea. There is only one problem—if you use it too frequently, it an dry out your skin. Try using it once a day and see if it works out for you. Salicylic is also known as beta hydroxy acid. Also, stay away from alpha hydroxy acids they may be too harsh for your rosacea. If you want, you can get Trish McEvoy Beta Hydroxy Pads from Amazon…though they’re pretty expensive.