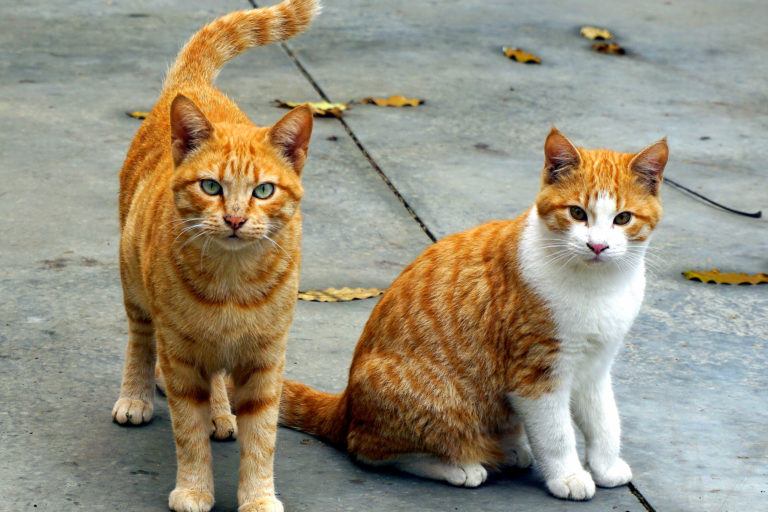 Ah, the numerous feline questions: how to get rid of cats? What do you do with feral cats or strays once you’ve caught them? Will they eventually take over the world? I will by no means attempt to convince you that I am either an ethicist (one who makes ethics their profession) or a trained animal control official. What I will tell you is that a majority of those people working within the animal control system tend to agree that a trap-neuter-release program is the most effective way to deal with unwanted cats and feral colonies. But (and this is a big “but” for some people) that strategy doesn’t get rid of cats, does it? Well, not immediately anyway. All too often feral cat colonies go unnoticed or ignored for far too long, producing cats that are too “wild” to trust humans. The adult cats in a feral colony are better off released, while a kitten that is anywhere between 4 and 10 weeks old is a possible candidate for socialization or domestication. After that, you’re looking at the possibility of a feral cat being feral for the rest of its life, with no chance for adoption…and that is a sad situation.

Finally, if that cats aren’t bothering you directly, think about if you can coexist with them. After all, cats are probably the single-most effective natural way to get rid of mice.  They aren’t all bad.

I’m not going to pass judgment on anyone for how they manage a feral cat problem. Euthanizing is always an option, and sometimes, if a feral cat is rabid or its behavior is cause for alarm, euthanizing the cat is the only option left. But I would suggest that you, as a concerned citizen and a taxpayer, consider the amount of effort that non-profit organizations like the Humane Society and the Feral Cat Coalition have put into saving these animals’ lives and saving you your precious tax money.

Best Ways to Get Rid of Cats

If you’re trying to get rid of cats that are owned by your neighbors, you can put the gun away, George. In most states and townships, it’s a crime to kill a legally registered pet. If you’ve talked to the owner of the pet and they’re giving you the run around about keeping their cat off of your property, I would call an animal control officer or the police department. Animal control officers are trained to handle complaints about legally registered pets and can, under certain circumstances, threaten someone with criminal charges. Talk to them if you want options for getting rid of cats.

If your local animal control agency isn’t functional, or you live in Alabama, it might be time to take matters into your own hands to get rid of cats. If there’s one thing I’ve learned from our recent adoption of Sebastian (a 5-month-old kitten), it’s that cats don’t like water. Luckily for you, there are such things as motion sensing sprinklers. That’s right: you can set a range for the motion detector, and watch with glee as each and every cat that comes onto your lawn is soaked and so freaked out they don’t know which way to run. Bring popcorn. By the way, Havahart makes a good sprinkler cat deterrent, which you can get at Amazon.

If the cat you’re trying to get rid of is tame and doesn’t have an owner that you know of, chances are it’s a stray. There are two things you can do with a stray. But before you do anything you should call your local humane society and veterinarians to find out if anyone is looking for a cat that fits your description. Microchipping your cat saves everyone a lot of time. If it’s certain there is no owner, but it’s friendly, you can either take care of the cat yourself or you can put it up for adoption. Either way is going to cost you money, but if the cat is tame enough to sit on your lap or take food from your hand, it’s quite possibly a good candidate for adoption.

Feral cats are perhaps the biggest problem animal control agencies (and our public funds) face today. Feral cats over the age of 10 months are considered almost impossible to domesticate (or socialize), and need to be dealt with accordingly. You have a couple of options here. The first option is to trap the cat, or cats, and have them neutered/spayed and then released. Havaheart also makes humane animal traps. The functioning theory behind the trap-neuter-release program is that because feral cats over a certain age will never be tamed, they’re better off left in their original habitat, to die of natural causes—rather than euthanized.

The second option you have for getting rid of feral cats is to socialize the kittens for adoption. Any cat under 10 weeks old is considered a candidate for socialization, which makes them adoptable. Of course, their adoptability isn’t certain if you’re going through an organization like the Humane Society. They put the cat through a number of tests, checking for distemper, worms, fleas, and other health problems while watching the cat’s behavior to make sure they’re not putting a man-eater up for adoption.

A number of different sources (one of which I’ve linked to) say pretty much the same things. If you’re dealing with a stray that is somewhat tame, you need only lure the cat into a carrier and whisk them away to your nearest animal shelter. If you’re dealing with a feral colony or family, you should probably start the process by feeding the cats at regular intervals in the same spot on your property (or wherever you are). After a week of consistent feedings you will have built a repertoire with the cats and they will recognize the pattern and the following day should return to a yard filled with humane animal traps that you have either borrowed from an animal control organization like the FCC (Feral Cat Coalition) or have purchased yourself online. Putting the same kind of food in the very back of the trap, with a trail of crumbs (or whatnot) leading into the trap, you will ensure a clean capture and bring the cat to your local animal shelter for one of two things: neutering or euthanasia. Most of us would choose the former, but some of us don’t have the time or money for humane solutions. I pass no judgment here.

Natural Ways to Get Rid of Cats

I’ve already mentioned the motion sensing sprinkler systems, but I figured I should put the idea up over here instead of burying it in the article. Some people might think that frightening a cat with an automatic sprinkler is inhumane. I would beg to differ and invite them over to watch your neighbor’s cats getting soaked. Nothing, in my book, is funnier than a wet cat.

You could always try cat repellent, but I wouldn’t count on it. Cat repellents aren’t designed to last much longer than a day or two without degrading and losing their potency. Certainly, most are all natural and won’t kill the cat, but they require daily treatment and aren’t a good option for covering an area much larger than a garden.

I would recommend an Ultrasonic solution, but cats and other animals tend to get used to the “sounds” emitted by these devices and will eventually find their way back onto your property. If you want to go this route (because you’ve got other problem animals), we’d recommend the Yard Sentinel Ultrasonic Repeller, sold by Amazon.

Cat repellent plants like Coleus canina, known by most as Scaredy Cat, are another natural option you might have for getting rid of cats. The plant itself may be used as a barrier for gardens or other areas of your lawn, producing a foul smell that cats simply hate once they touch it. You might even want to try using wild roses and bramble bushes as natural barriers to such things as your garden.