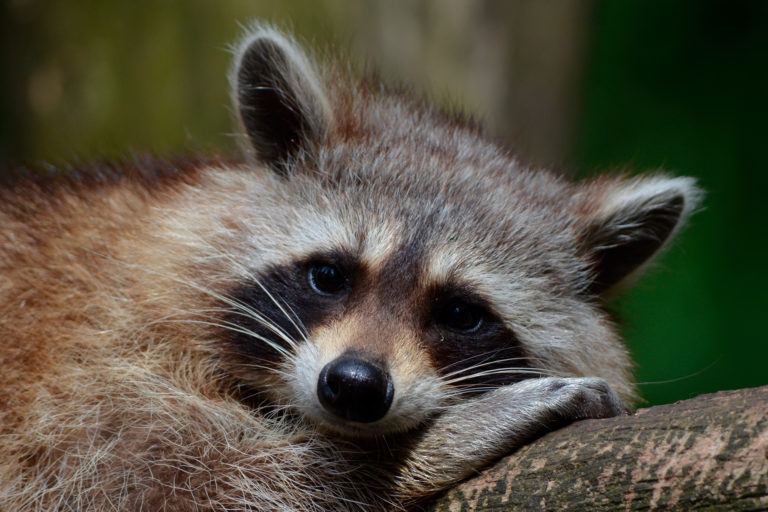 Raccoons (Procyon lotor) are perhaps the most immediately recognizable animal/pest found in the U.S. And they’re not hard to find, even with the masks they wear. Coons are unbelievably versatile and adaptable. Yes, they are most commonly found in areas where there is water nearby. However, they are frequently found smack dab in the middle of towns and cities too. This is due primarily to the fact that they are extremely adept at dumpster diving. Being omnivorous, they do not care what they eat. They like fruit, meat, veggies, fish, bugs, lo mein, Jello, Slim Jims, and just about anything else they can get their adorably dexterous little paws on. If it’s edible and you toss it in the garbage, they’ll eat it.

Movies often portray raccoons as smart, curious, and cute as the dickens. What the movies fail to show us is what an incredible pain in the ass they can be. Turns out they don’t dig daintily through your trash. Oh hell no. They dig into that garbage like a four-year-old under the tree on Christmas morning. That’s only the beginning. If there’s mischief that can be caused around your yard, they’ll cause it. If you have a pool, there’s a good chance a raccoon will take a dump in it. I know I shouldn’t laugh about that, but, well, it’s funny. Speaking of water, if you keep ornamental fish, like koi or goldfish, forget about it. They’re dinner. And since raccoons are nocturnal, there’s a pretty good chance all those expensive fish will be gone before you even realize there’s a problem. They also like to eat things you were planning on eating, like garden vegetables, corn, berries, chicken eggs, and sometimes even the chicks. Oh, let’s not forget about bird feeders. They’ll empty ’em in a single night and smash ’em to bits just for good measure. Generally, though, the number one reason for people wanting to know how to get rid of raccoons is that they have a habit of getting into and building a home in the attic or soffits of your house. Unacceptable. Whatever your reason for wanting to get rid of raccoons, read on. I’ve got your back.

A good raccoon trap is by far the your best bet for raccoon removal. Just keep in mind that trapping and relocating raccoons is illegal in most states unless you have a permit. When picking out a live trap, find one that is at least 12″x12″x32″ and very solidly constructed. Since raccoons will eat anything, you have your choice of baits. Canned cat food and canned tuna work well, but you may end up with the wrong animal (like the neighbor’s cat). Most fruits will work well too. When relocating, take the coon at least 10 miles away to a raccoon-friendly environment. Be very careful. They will bite. If you need to find a live trap, Amazon has a wide variety of them.

An important aspect of raccoon control is keeping them out of the garbage cans. There’s no reason for them to leave if you constantly, but inadvertently, feed them. For starters, get yourself some good, solid metal trashcans, some bungee chords, and a cinder block or two. It’s kind of a pain in the backside, but you will need to cover your garbage, bungee the lid down, and place cinder blocks on top of it every night. Even if you use a city-provided garbage bin, you can still use the bungees and blocks. Even though I’m opposed to the wasteful nature of this idea, it is quite common for people to double bag any waste meat products so the alluring smell won’t be as strong.

Keep your yard clean and free of raccoon fodder

If there’s no food in your yard, there’s far less reason for raccoons to come around. Don’t leave any pet food of any sort out overnight. Coons love that stuff. If there are fruit trees in your yard, make sure to rake up any fallen fruit. It will start rotting on the ground and become extra fragrant and lure in raccoons. Bird feeders are another big one. It sucks, but you will need to bring your feeders in every night for at least a few weeks. If the raccoons don’t live in your yard, there’s a good chance they’ll quit stopping there at night once they realize the food source has dried up. They’ll be back eventually, but you’ll at least have a little peace.

Putting up a fence is a great way to control raccoons. Unfortunately, they are great climbers, so it will have to be an electric fence. Almost any fence can become electrifying simply by adding one strand of wire about eight inches up from the ground and eight inches back from the fence and connecting it to a pulsating fence charger. This same method can be used around your gardens, fish ponds, shrubs, trees, etc. The only difference is that you would want two strands. One at 6″ up from the ground and one at about a foot. Also, you should only need to run them at night. One final thing, clear away any brush, wood piles, old logs, or anything that a coon might be able to use as cover.

Devices designed to be scary oftentimes work quite well to get rid of raccoon problems. The biggest problem, however, is that raccoons are pretty dang smart and realize relatively quickly that whatever you put out there can’t really do them any harm and therefore become useless. The best thing you can do in this situation is to switch up the scare devices regularly so the coons (hopefully) don’t become accustomed to them. There are a variety of motion-activated devices available you can use including flood lights, radios (set them on talk radio, as raccoons avoid human voices…especially if the human voices are talking about politics), sprinklers, and utlrasonic noisemakers.

Raccoons in the Attic and Chimney

Raccoons like to set up shop in nice, dry, warm places like hollow logs, burrows, holes in trees, and dens abandoned by other animals. So why not go one step further and move into your attic? It’s warmer, dryer, and probably a whole lot more spacious. Good for them, bad for you. Besides the fact that raccoons ruin insulation, wreck screens, and make holes in the side of your house, they also pee and poop up there. And…yuck. Aside from being destructive, raccoons commonly carry fleas, roundworm, and distemper. For all of these reasons, getting rid of raccoons is important.

If there are raccoons currently living in your attic and you want to take matters into your own hands, wait ’til night when the adult coons will be out, and get to work. Set up as many lights up there as possible. Raccoons like dark. Next, grab a radio or two or three and set them loudly on talk radio. Sometimes the two things alone are enough to get the raccoons to pack their bags. Otherwise, if you are certain there are no baby raccoons living up there that will be left to die, rot, and stink up your house without their mother, exclude the adult. Start by trimming back all tree branches that the coons might be able to use to climb onto your roof. Next, find and patch any holes you see. Look carefully, as they only need about a four-inch hole to enter. It’s always a good idea to leave one hole open in case there’s more raccoons in there. This way they will be forced to leave through that hole and you can firmly secure a live trap in front of it.

Here’s the deal: raccoons are tough to get rid of, especially if they have babies. Oftentimes the babies will be down in the walls where you won’t be able to get to them, and without their mother, they will die and make your house smell like holy hell. So, if this seems like more than you can handle, call a professional to control raccoons.

Because raccoons are such clean animals and will not usually go to the bathroom in their dens, it’s a good idea to soak towels with this natural raccoon deterrent and toss them either into the dens or place them at den entrances. Ammonia is found naturally in urine, and the smell of it can trick the raccoons into thinking their den is soiled. This may cause them to desert it.

This raccoon deterrent is readily available at most sporting goods stores and many online retailers. Look for urine from wolves, coyotes, bobcats, or mountain lions, and spray it around areas where coons are hanging out. This is supposed to trick them into thinking predators are nearby and scare them off. Amazon sells Shake-Off Coyote/Fox granules.

I’m a big fan of using this product as a means to get rid of raccoons and other pests. It is a motion-activated sprinkler. When a raccoon trips the sensor, the sudden noise and action of the sprinkler startles raccoons and scares them off. They also get good and wet. And that’s just funny.

That’s right. I said it. Guns. If you want to kill raccoons, this is the most sure fire way to do it. Just make absolutely certain you know all the laws pertaining to the firing of weapons in your area and the legality of killing raccoons in and out of season. There’s just nothing like using a good rifle to kill raccoons. Makes you feel like a man. Ha!