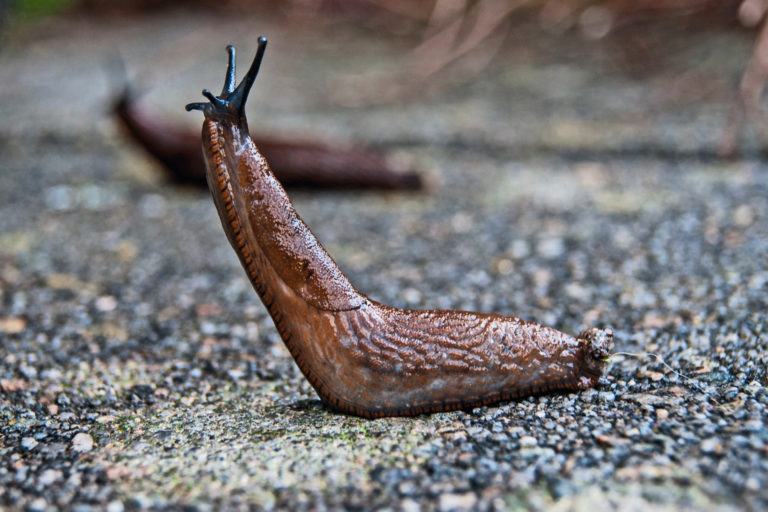 Poor unfortunate slugs. They’ve evolved a physical form — slimy, squishy, and vulnerable — that makes them prime targets for amateur biologists and bored children alike. Because they are fairly simple and delicate creatures, most of the backyard experiments conducted on slugs end in their deaths, regardless of whether that is the intended outcome. And even while my sensitive side protests loudly against the slaughter of helpless slugs, I have to admit that the slug’s burden is the gardener’s boon.

Slugs are extremely destructive garden pests that spend their nights eating holes in the leaves of decorative plants (making them ugly) and fruits and vegetables (making them dead or at least useless). From the perspective of a gardener with a slug problem, killing a slug is a step toward saving a plant. Also from the gardener’s perspective, all the casual experimenters’ creative methods for ending slugs are pretty neat. In this article, you’ll find all the most common and reportedly most effective methods of slug control, methods that typically resemble the best ways to get rid of frogs, so you just might hit two birds with one stone. Most of these involve killing the slugs, but I’ve thrown in a few less cruel options for those who would rather not.

Make your garden as inhospitable to slugs as possible. Slugs have to stay cool and moist to survive, so they’re attracted to dark places during the day and damp places all the time. Pruning any leaves of your plants that hang close to the ground and removing leaf litter or mulch will eliminate potential daytime hiding places for slugs. Also, watering your garden in the morning will ensure that it is as dry as possible by nightfall, and therefore less attractive to slugs. 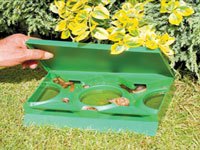 Beer traps are one of the oldest tricks in the slug control book. Slugs are attracted to the yeast in beer, so if you place shallow containers of fresh cheap beer on the ground near your garden, slugs will crawl in and drown. If you live in an area with freakishly large slugs, you may need to use a soup can or Dixie cup (only fill it about four-fifths with beer, so there is a space at the top) and dig a hole just deep enough that the edge of the container sits level with the ground. If you rig the traps right (or decide to buy pre-made beer traps), slugs will be able to slide into the beer, but not up and out. In the morning you can empty the traps of both beer and dead slugs, and refill them the next evening.

Copper is an expensive but reportedly effective way to repel slugs without killing them. It sounds unlikely, but according to every source I found, when a slug comes into contact with copper, it receives a small but unpleasant electric shock. Usually, this is enough to make the slug decide to eat somewhere else but not enough to kill it. Copper is most effective against slugs when it is used around each individual plant, and can be purchased in the form of tape, wire, or round bands. Amazon sells Copper Foil Tape for about $15 for a 12 yard roll.

Collecting slugs to kill is one way to put a dent in their population. There are a couple of different ways to do this. One way is to walk through your yard and garden at night, when slugs are active, carrying a flashlight and a bucket of salty or soapy water. Every time you spot a slug, drop it into the bucket. A less time-consuming method involves setting wooden boards or upside-down flower pots in the grass near your garden. Slugs will shelter under them as the sun rises, and in the morning you’ll be able to collect and kill the congregated slugs.

Iron phosphate baits are a safer alternative to the traditional slug pesticide, metaldehyde. The baits come in the form of pellets that can be spread on the soil in a garden. When slugs ingest iron phosphate, it interferes with their metabolism, so they stop eating and starve to death within a few days. Because it poses no known risks to people or pets (unless a whole lot of it is consumed), iron phosphate is safe to use even in fruit and vegetable gardens, and around children. Escar-Go! and Sluggo are the two best-known brands of iron phosphate baits.

Allow slugs’ natural predators to live in your garden. They have quite a few, including ducks, snakes, fireflies, and toads. Keeping some of these critters around to eat your slugs should rapidly diminish the population.

Create a barrier of something scratchy. Slugs avoid touching anything sharp or abrasive, because they have to ooze mucus to repair scratches in their skin, and too much oozing dries out and ultimately kills them. Placing crushed eggshells, roofing shingles, or sandpaper around your garden or individual plants should keep slugs away.

Diatomaceous earth is a natural rock that is crushed into a fine powder and sold as a pesticide. Its particles are very sharp and will quickly dehydrate slugs that come into contact with it. Unfortunately, it will also kill most other insects, including beneficial ones. So be careful if you choose this. You can find 10lb bags of Diatomaceous Earth at Amazon.

Long hair or fine thread, when wrapped around individual plants, will snare slugs that attempt to climb up toward the leaves. A slug’s squishy, sticky physique simply gets caught up in hair and will stop its climb.

With the exception of iron phosphate, most of the chemicals used by professionals to control slugs are pretty nasty. One, a powder called methiocarb, works as a pesticide against a wide range of species, and is such a powerful toxin that its use is limited by the EPA to certified individuals. As a consumer, you should never encounter methiocarb, but you probably will find its slightly less dangerous counterpart, metaldehyde. Metaldehyde is the active ingredient in most commercial molluscicides, and it does a great job of killing slugs and snails. Unfortunately, it’s also toxic to every single other kind of animal that comes into contact with it, particularly through ingestion (even secondhand, if Fido eats a poisoned slug), but also through inhalation or skin contact. Pets are the most noticeable victims of metaldehyde poisoning, but it can also happen to children, gardeners, and wild birds and animals. Using it around edible plants is generally not recommended, and the decision to use metaldehyde at all should probably be made only after carefully weighing its risks against the annoyance caused by slugs.