Getting rid of voles is actually a pretty good subject. They’re already in your garden, eating everything they can get their little vermin teeth on, so you might as well know a little bit about what you’re up against. There are about seventy species of voles (a.k.a. meadow mice or field mice) in North America. Of those species, there are about forty that belong to the genus Microtus, and for the most part, these are the little jerks we’re concerned about. In general, a vole lives anywhere from 6-12 months, doesn’t hibernate and mates year round. That point is important — that a vole is a prolific reproducer.  A typical vole has about a 21-day gestation period, and has 5-10 litters of about 3-6 baby voles per year. In short, they are baby-making machines which would overrun the earth if given half the chance.

The worst thing about having baby-making machines around is that they have a tendency to be eating machines as well. And that, class, is the reason why I am going to teach you how to get rid of voles. Voles eat almost anything they come across. It seems the only stipulations are that the tasty treat in question be both some sort of vegetation and something that you do not want them to eat. That’s all they ask. Really. Just a little taste of your (are you ready?): tomatoes, beets, carrots, celery, lettuce, artichokes, cabbage, Brussels sprouts, cauliflower, spinach, turnips, etc. The point is if you grow it, they will eat it. Vole damage can be quite extensive and extremely frustrating. So, if you’ve had all you can take and you can’t take no more, read on, get to work, and start getting rid of voles. 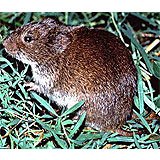 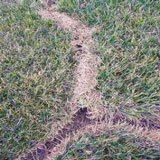 Start by making your yard inhospitable to a vole and its family. Clear away any and all piles of brush. Brush piles make great shelter for a vole, and other animals for that matter.  Getting rid of messy old brush and junk piles will help you get rid of frogs, rats, mice, and keep foxes away too, so you will be doing your yard a huge favor.

Dispose of any other ground cover while you’re at it. This could be low bushes, trash, wood piles, or even the spaces underneath small raised sheds. Avoid using mulch around trees. If you already have, get rid of it. Mulch makes good vole cover. In the winter, keep the ground free of snow for three feet around trees.

Apply some vole control to your little slice of heaven by putting up a little fence. It doesn’t have to be anything fancy, but it does need to be done right. Start by getting a bunch of stakes and a few rolls of ¼” mesh or smaller hardware cloth. Voles dig, so you want to bury your fence about a foot down. They don’t, however, climb worth a darn. So, if you live in a warm region, 12″ above ground is fine. If you live in a cold region, try to make sure the fence is taller than the maximum snow depth. Remember to clear brush and weeds away from your fence.

One very common type of vole damage is known as girdling. This is when voles gnaw a ring of bark all the way around the base of a tree, thus killing the tree. Girdling from voles is non-uniform and comes from any and all directions. To avoid it, get your hardware cloth and ring the trees with it. Press it into the ground as much as you can without causing damage to the roots. Remember, if you’re in a cold area, make sure the height of your tree fence exceeds winter snow levels.

There are a number of different trap styles you can use. If you want to be a cheap ass about it, just get yourself a bunch of those old school Victor Traps (that’s what I would do). Otherwise, there are a couple of great live traps available. We are all, of course, familiar with Havahart. Great traps. You may also want to look into Sherman Traps (Model SNG). They too are mucho effective. Whatever you use, place the business end of the traps at 90° angles to vole runways. For vole bait, use either an oatmeal/peanut butter mixture or apple bits. I recommend apple. It’s more exclusive. We’d also recommend the Black Hole Rodent Trap, sold at Amazon.

If you don’t want to have to get rid of voles again in the future, do what you can now to remove their food sources, and they may choose to set up elsewhere next time. Voles eat seeds as well as garden plants, so take your bird feeders down. If you have fruit trees, especially apple, make sure you keep all fallen fruit picked up. If you have any evergreen trees around, make sure to rake up any fallen needles. They eat those, too. Also, prune any branches that hang to the ground.

Because voles like to stay in vegetated areas like grass or weeds, one brilliant way to stop them is to put a gravel buffer around the area you are trying to protect.  The voles will hit the gravel, and find it unappealing.  In most cases, they will turn around and keep blazing through the grass instead of attempting to forge ahead into gravel territory.  This works great around gardens and small lawn patches.  It can be harder to pull off for a larger space or an entire yard.

The best time to put out vole poisons is late winter and very early fall. This is because natural forage is scarce at this time, and the voles are less picky about what they eat. One thing to be aware of when using vole bait to poison voles with is bait shyness. Bait shyness is what you call it when voles learn that whatever you are putting out for them is evil and will kill them. To avoid this, use several types of vole poisons and use a different one every time you reapply. Vole baits are easy to find. Not only are there hundreds of online vendors that carry them, but your local hardware store has ’em too. Look for either an anticoagulant that contains Warfarin like Decon, Rodex, or Kaput Mouse Blocks (which can be found at Amazon), or vole poisons like ZP Bait that contain zinc phosphide. Whatever you use, you may want to consider using a vole bait station such as the Vole Control Bait Station System to avoid having birds and other non-target animals take the bait. Or put the vole bait in an open-ended box.

Best Ways to Get Rid of Voles Naturally

This oil, derived from the seeds/beans of the castor plant (Ricinus communis), is nontoxic and doesn’t even hurt the animals. Simply spray it where you want it, and the unpleasant taste and smell of the stuff makes castor oil an effective vole repellent.

This is the oil that is found in hot peppers, and it is available in many different types of sprays for many different purposes. The type doesn’t really matter; what matters is that it’s hot and it makes your vegetation taste bad to voles.

These birds are amazing for vole control. They will never eat all the voles, but they can certainly put a damper on the population in your yard. The best thing you can do to encourage owls to nest in your yard is to purchase and mount some owl nest boxes.