Adorable flying friends who eat bugs and mosquitoes? Nightmare demons who haunt your dreams? People are generally fairly split on their opinions of bats. Whichever stance you take we can all agree that we don’t want them in our homes. Getting rid of bats in the home is a challenge since they can hide almost anywhere and of course because they can fly.

Bats not only eat mosquitoes and other extremely annoying bugs, but they also are pollinators and important to many different eco-systems. As with so many things in nature, the answer is never an all-or-none one.  It is important that humans be able to co-exist with bats in a balanced way.

While bats are generally viewed as useful and helpful, they can also carry diseases like rabies, and rabies are just plain bad. That is not a reason to exterminate them, but is a reason to keep them out of your house, cabin, or tent.

There’s quite a bit to cover when talking about getting rid of bats so let’s get started. First we’ll talk a little bat safety and then move on to removal and prevention.

Safely Getting Rid of Bats

Bats are fairly harmless when it comes down to it, and can even be helpful.

The real safety issue with getting rid of bats is the possibility of rabies.  Bats are known to be a common carrier of rabies, and appear to be able to transmit it with even a small bite. Now only a small fraction of bats actually have the disease — less than 1% of all bats by many counts — but they are the highest cause of rabies in humans. This is usually from mishandling of bats when trying to remove them from the home.

Always wear thick leather gloves, and preferably gloves that cover the wrists and lower arms, when handling a bat! No exceptions. A single bat bite is all it takes to snag a case of rabies. Even if it seems to be dead wear the gloves when getting rid of a bat. Bats are pretty heavy sleepers in the daytime and could be mistaken for deceased.  A bat bite is incredibly small – you can barely see or feel it — so it can be hard to even know when you have been bitten.

Better yet, don’t try handling the bat yourself and only let trained professionals deal with them. We realize this is not always an option — say, if you find a bat in your cabin and you are 50 miles from nowhere.

If you are bitten or scratched by a bat or you suspect you have been bitten or scratched then get checked out immediately. Rabies is only effectively treated by a vaccine that must be administered before the virus takes hold in your system. If you can, save the bat (preferably dead). Testing the bat directly is the most conclusive way to determine if it may have transmitted rabies.

Above all else, be careful if you are in close proximity to a bat. Don’t get rid of the bat just to end up with rabies!

One more thing. Many species of bats are protected, so killing them is discouraged.  Finding someone who specializes in bats will allow you to make sure you are removing the bat in the proper way.

Best Ways to Get Rid of A Single Bat

If you have a bat in your house, it will commonly sneak into your home looking for a cool place to sleep and get trapped. Then you have a flapping nightmare in the room doing endless laps around the ceiling, or worse yet, a bat that is hiding perfectly still somewhere but you cannot locate it. Hopefully you’ve never had to experience it. (It’s terrifying!) Anyway. A single bat isn’t that big of an issue since they are desperately trying to get out too and all you have to do is help them.

Bats love cool places and many times are attracted to air conditioning and fans in the house. They think it’s an inviting cave entrance then freak out when it’s not. Immediately turn off all cool air sources so the bat calms down trying to find this nonexistent escape route.

By turning off fans, such as ceiling fans, you will also prevent tragic bat accidents where the bat gets caught in the fan and dies. Even though we don’t want bats in our house, the goal is not to eradicate the world of bats. We like them to live.

A bat will get rid of itself if it thinks there is a way out. Open a window and remove the screen and the bat should recognize the exit and book it. Pick a window that will have a breeze blowing in it from the outside for best results.

You might need to encourage it slightly and ever-so-gently, perhaps with a very long-handled broom.  Don’t abuse it or make it view you as a threat; rather, gradually bring the room head closer to the bat, so it senses the need to move toward the window. If a bat feels that something is approaching it, its instincts will cause it to move away from the object.

If it’s easier, open a door to get rid of the bat. The idea is the same. You want a breeze from the outside to attract the bat and make it realize there’s a better place for it. Give the bat some space and it should fly right out. If you’re too close to the door the bat will avoid it since it thinks you’re going to attack it. (Bats are really scared of us.)

However, if you have bats near the house and that is how this one got in, leaving the door wide open might just make the problem worse!!

If the bat has gotten trapped in a room with no windows or the bat is too scared to leave you might have to trap it. A fishing net can be used to get rid of a bat by trapping it or snagging it out of the air. Then you can rush it outside and let it go free. Just make sure you’re wearing your strong leather gloves, preferably ones that go well past your wrists, since you might have to untangle it.

Even if you are wearing gloves, behave as if the bat could bite you at any time.  The bat does not view a human as its enemy, but you have to understand that a trapped bat is likely stressed and panicked and not sure what to do.  It can be more unpredictable than a bat in a normal environment.  All animals are like that — when threatened, their behavior changes and is less predictable.

A scared bat will sometimes get tired or slam into a wall causing it to finally land on the floor. If this happens then toss a wet or damp towel over the top of it. The heavy towel will prevent it from crawling out and getting free. Again, and I can’t stress this enough, wear the gloves when you do this. When you’re getting rid of the bat it can bite through the towel and into your hand.

Stunned or resting bats can appear dead, but in reality they are still alive. Never assume a bat is dead just because it is not moving.

Getting Rid of Nesting Bats 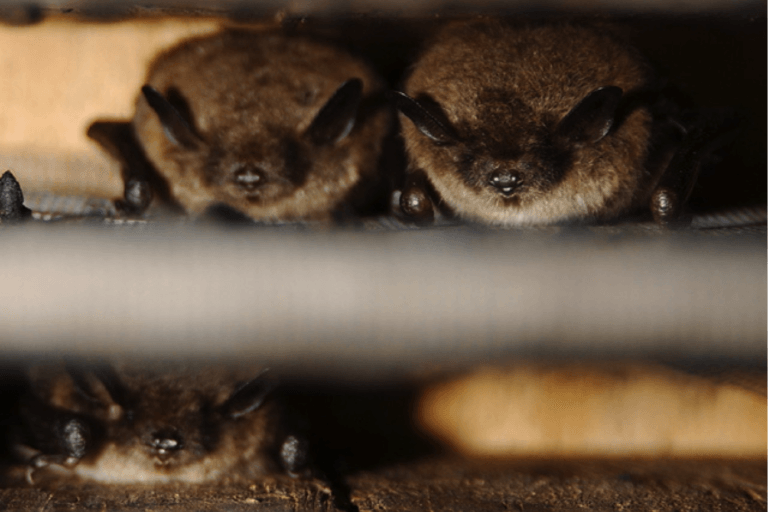 Go outside right at dusk and walk around your house

Keep an eye on attic vents and under the roof overhang for bats escaping. It might take a few nights to pinpoint the location as they are fast and tiny. You can also try at first light when bats are returning.

Bats are also fans of any structures that provide cover — shelving, eaves, gutters, and wood piles.  Make sure you look to see where the bats appear to be resting, not just where they are flying.

Look for the hole the bats are escaping from

When you have spotted the location they are coming out from then get a ladder and look for the hole the bats are escaping from. It can be small…really small. Bats can come out of a hole the size of a nickel so look closely. A recently damaged vent or soffit is the most likely culprit.

Once you’ve found the hole cover the area with a heavy flap of canvas, leather or rubber. The idea is that the bats will push their way out the next evening to go eat but be unable to get back inside because of the flap. After a few nights the bats will give up and look for a new home. Then you can seal the hole and hopefully pat yourself on the back for getting rid of your bats.

If you find that you have windows or a porch that appears to be letting bats in, a simple way to fix it is by using a simple screen window patch (here on Amazon).  This will keep the bats out until you can figure out a more permanent fix, perhaps one that involves a contractor.

You may also have some success with a can of dog/cat repellant and apply to areas where the bat is getting into the house. It’ll help with that little bit of extra deterrent. We’d recommend Keep Off sold at Amazon.

Many people say that using an ultrasonic repeller — one that humans cannot hear but will drive bats crazy — can work well.  They might, but that doesn’t mean you can ignore the root cause of the problem.  We like the CleanErth Advanced Repeller, available here on Amazon.

If you’re not up for getting rid of your own bats than you can call a professional. It’s not cheap and they’re not going to show up and gas out the little devils. Professionals have to go about removing the bats in a way that won’t harm them since they are protected. They will have an eye for where bats are getting inside and how much damage they have done to your home. If bats have been a constant problem in your house then their expertise is worth it to help you to finally get rid of bats once and for all.

Bat houses are a good idea if you want to keep the bats around, just not nesting in your house. They eat a ton of insects! You can either build them yourself, or order them from Amazon, like the Looker Products Triple Chamber Bat House.