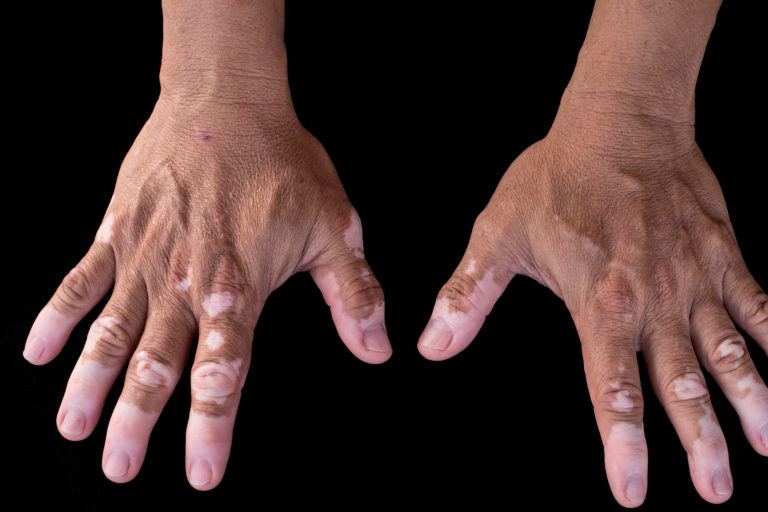 Vitiligo is an odd disorder that affects the way skin produces pigment. Because the contrast is so much greater for darker-skinned people, vitiligo is a problem often associated with African Americans, but it actually affects people of all races equally. It is estimated that one percent of the world’s population has some form of vitiligo. The areas of depigmented skin can vary in size and location from small spots on your knuckles to large portions of your face. Because we tend to stare at people who look different, a lot of work has been done to try to get rid of vitiligo, or at least make it less apparent. It largely depends on your skin tone.

For lighter-skinned people, it might be as easy as staying out of the sun, but for darker-skinned people, more drastic steps might need to be taken. Other than the increased possibility of UV exposure (and its potential relationship to glandular problems such as Addison’s disease), there is no reason other than aesthetics to worry about the lighter areas of skin. That being said, whenever you notice an unexplained change in your skin, you should definitely talk to a dermatologist about it, just to be sure. Better safe than sorry.

The Stigmatizing Nature of Vitiligo

It is human nature to look at a person and make a judgement about them based on what you see. Our brains are so good at picking out things that seem slightly off or not quite right. Of course, that is why having such an obvious (but totally non-communicable) condition like vitiligo brings out so many negative reactions. That said, a lot of vitiligo sufferers have decided to wear their marks proudly. It’s not your fault that you were born this way. Why should you have to hide? Body positivity is a wonderful thing.

Vitiligo is a mysterious condition with several possible causes. It is thought by many to be an autoimmune disorder, because it appears that the body destroys the melanocytes. It can also be related to hormonal changes and thyroid problems. Having parents with vitiligo increases your chances of developing it at some point, so there is a definite genetic link. The sad news is that there is currently no way to cure the problem. So we are left trying to treat the symptoms, some of which can be stigmatizing and detrimental to a person’s physical and mental well-being.

Protect yourself from ultraviolet light exposure. First of all, those white spots are white because they lack the skin pigment melanin. Melanin is an important defense mechanism that your skin uses to protect you from the harmful effects of UV radiation. Without that protection, you are opening yourself up for problems with sunburn and skin cancer. Also, exposing your still-pigmented skin to light will cause it to darken, making the vitiligo spots more obvious. Be sure to wear sunblock whenever you venture out. Everyone should do that, but people with melanin problems need to be extra careful. You can get Banana Boat SPF 50 family size sunscreen at Amazon.

Cover-up makeup is a possibility for some. The reality of the situation is that some people will have a hard time covering it up. If the spots are small and your skin is naturally lighter, it might be hard to notice in the first place. The problem becomes very obvious for people with naturally darker skin, as the contrast makes it very apparent. Still, there are cover-up makeup products designed for just this sort of thing. I guess it comes down to assessing how much time and effort you want to put into avoiding people’s stares.

Medications can help reverse vitiligo. Dermatologists will often prescribe corticosteroid creams or injections to treat vitiligo. Another treatment involves the application of a drug called tacrolimus, which affects the immune system response that is likely destroying the melanin in the first place. Results with any of these treatments is better in areas that have hair follicles, as that is where you will most likely find a few remaining melanocytes to propagate with controlled UV exposure. Because of the necessity of hair follicles, areas like your hands probably aren’t going to respond to treatments like your head and neck will.

Depigmentation is a very drastic option. Using the drugs monobenzone or hydroquinone to remove the pigment from surrounding skin is a permanent and potentially dangerous procedure. It’s not instantaneous. In fact, it can take four months to a year to achieve the desired level of pigment. Once you have started removing pigment from your skin, you will have to be careful about going out into the sun, as you will be completely unprotected. Also, exposing your depigmented skin to sunlight could cause the little bit of pigment that is left to become very obvious. Which defeats the purpose.

Photo therapy is another common type of treatment for vitiligo. There are a couple of varieties that utilize slightly different kinds of UV light and even lasers. Another pairs a type of UV light exposure with a drug called psoralen, which helps allow more light to penetrate the skin. The idea is to get the remaining hair follicle melanocytes all fired up, and given enough time (1–2 years), they will repopulate the lighter areas.

Transplantation of melanocytes from unaffected areas of skin is another possibility. To put it simply, they shave some skin off your ass, grind it up, and form a graft out of it. They then remove the top layer of skin from the vitiligo region, and attach the graft over the top. It’s a fairly involved, and definitely painful, process that isn’t permanent and isn’t always successful.

If you are experiencing vitiligo patches and like to spend time out in the sun, then you need to be applying sunblock on a very regular basis. Vitiligo has been associated with an increase in melanoma problems, and exposing your skin to excess UV light radiation is a surefire way to get skin cancer.

Eating foods high in folic acid and vitamin B12 are said to help repigment areas affected by vitiligo when combined with sun exposure. Folic acid can be found in a lot of leafy green veggies, and vitamin B12 is commonly found in just about any meat, but especially in shellfish and liver. If liver doesn’t appeal to you, you can also try supplements like the Folic Acid, B-6 & B-12 supplements sold at Amazon.

This unusual tree, which is native to China, has several medicinal effects that have been known about for millenia. It’s probably most famous for its rumored memory-improvement qualities. It has been shown to help with capillary growth in skin and vitiligo repigmentation.