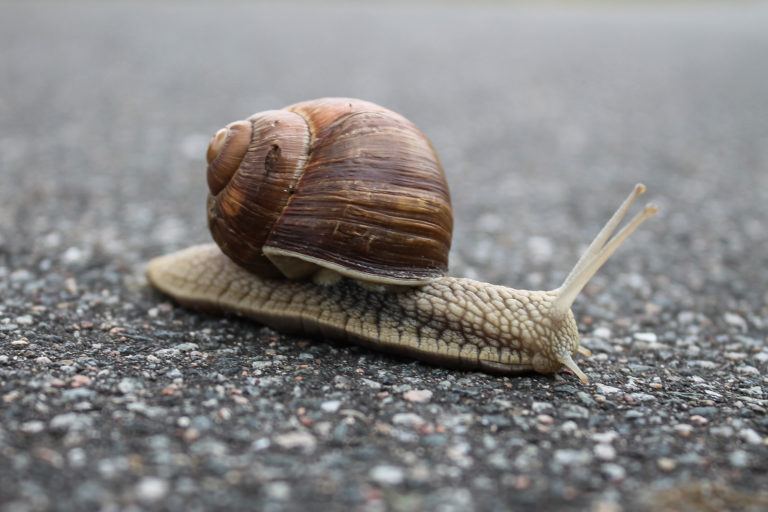 Snails are gastropod mollusks. And there are a lot of snails in the world. Most of them live in aquatic environments. The focus of this article is land-based snails. More specifically garden snails. The kind that climb over wall, plant, and gnome. If you are having issues with snails in a pool, pond, or fish tank, my advice is to get some snail killer. It has copper in it, and it works very well. It is available at every store that sells fish tank stuff. Another common garden pest is a slug. Slug is a common name for a snail with a very small shell or no shell. They are both gastropod mollusks. For getting rid of slugs, check out this article.

Snails are a huge garden nuisance. They can vastly change the scope of a garden in just one night of foraging. Snails are not tough critters to kill, but they can be persistent. They can reproduce as frequently as once a month, and many snail species can do it on their own. That’s called asexual reproduction. Their eggs are hard to see, and they can lay dormant in your soil for years. But there have been major developments in the war on snails since the saltshaker was first invented. I have found the five best techniques and concoctions to get rid of snails. They are listed below.

Stay away from snail killing pesticides that include metaldehyde as an ingredient. It comes in may forms (usually pellets) that attract the snails to eat them. Unfortunately, dogs and other animals are also attracted to these pellets, and when they eat them they can also die. So, if you don’t want to kill your dog or your neighbors’ dogs, stay away from these treatments.

The skin of snails is not easy to irritate. Their mucus membranes allow them to slide on the edge of a razor blade. It’s not that it doesn’t hurt them; it’s just that they are able to repair the damage with mucus. But, when there is a lot of oozing mucus caused by cuts, the snails dehydrate and die. So, gardeners put sharp obtuse stuff along the borders of their gardens to keep the snails out. Egg shells, tree bark, sharp rocks, and other things like that. My mom has been putting eggshells in the garden for years. I never really knew why until now.

Poisoning things in general is not advised, but there is one form that seems to be alright for all parties involved. And that is a poison made from iron phosphate. It is not water soluble and has been tested on animals and people with no side effects so far. It works on slugs and snails, though, and kills them dead. It comes in a pellet form and should be applied evenly over the affected area. It is supposed to last through rain storms, too, because it is not water soluble. Sluggo seems to be the most popular brand, and you can find Sluggo at Amazon.

Recently, coffee has been used to get rid of snails in Hawaii. The caffeine in coffee causes heart rates to increase, and if exposure is long enough, the little buggers have a heart attack and die. The potency of the stuff they use in Hawaii is 2%, which is 125 times more potent than cola. You can use your leftover coffee, which is a 0.05–0.1% concentration. Also, using leftover coffee grounds as garden mulch works very well. My mom has been putting her old coffee grounds into the garden for a long time, and she has not had a problem with snails or slugs for years. It is also said to attract earthworms and micro-organisms that are useful for plant growth. Win-win.

Yeast traps or beer traps are extremely effective for catching snails. They are very easy to buy or make yourself, too. Just simply place a jar in the ground so the top is level with the soil. At night, put a couple inches of beer in the jar. The snails will come to check out the smell and slide into the jar to get a taste. Once in, they won’t be able to get out because the beer destroys their mucus membrane. In the morning, remove the jar and dispose of the dead snails. Then move the jar to a new spot and do it again. Another way to trap snails it to lay boards down at night. The snails will congregate under it at night. In the morning flip it over and smash them.

By removing the snail’s preferred habitat, you decrease its desire to stay there. Snails like it moist and shady. That is why they hang out underneath stuff all day long. So, get rid of piles of rotting debris or keep it away from your garden. Think about moving the compost pile a little ways away if you can. Keep the soil cultivated and free of weeds. Now you have yet another reason to keep your garden weeded. Also, stop killing the frogs and toads. They love to eat snails.

Copper metal apparently gives a small electric shock to snails when they come into contact with it, so you can use it as a border to keep them out. But make sure they are all out before you put up the border. Otherwise you will have them trapped next to your plants. Copper can actually kill snails. It is the main ingredient in the snail killer stuff you buy for your fish tank. Amazon sells Copper Foil Tape for about $15 for a 12 yard roll.

Powdered or ground ginger poured in a ring around plants can act as a deterrent to snails. When they come oozing up to the ginger, they will turn around because the ginger burns them. Much like salt does except you don’t ever want to add salt to a garden. Salt will make it nearly impossible for plants to retain water.

Wood ashes will also keep snails away. But be careful where you put the wood ashes because too much of this stuff will throw the pH of your garden off causing the plants to die or at least not do very well. The recommended yearly dosage of wood ashes for a vegetable garden is one gallon per square yard. The ashes should not be used on most flowers, and don’t use them near potatoes either.

Strong-smelling herbs like wormwood, mints, rosemary, lemon balm, basil, parsley, and sage are strong deterrents for snails. These plants can be used as barriers to keep snails out. Harvest the herbs and use them as mulch underneath the plants you want to protect.

Snails have been around for a very long time, and they aren’t going anywhere anytime soon. Frogs, lizards, snakes,beetles, and even people love to eat them. So, maybe that’s what we should be doing with all these garden snails. Eat them with a little parsley butter. I hear that the mucus adds a nice crust to the snail foot. Just be sure you don’t use dead snails to cook with. Yes, they must be alive when you cook them. Also, if you undercook them, there is a parasite (angiostrongylus cantonensis) in wild snails that causes a form of meningitis, so make sure to cook them to 161 degrees F.