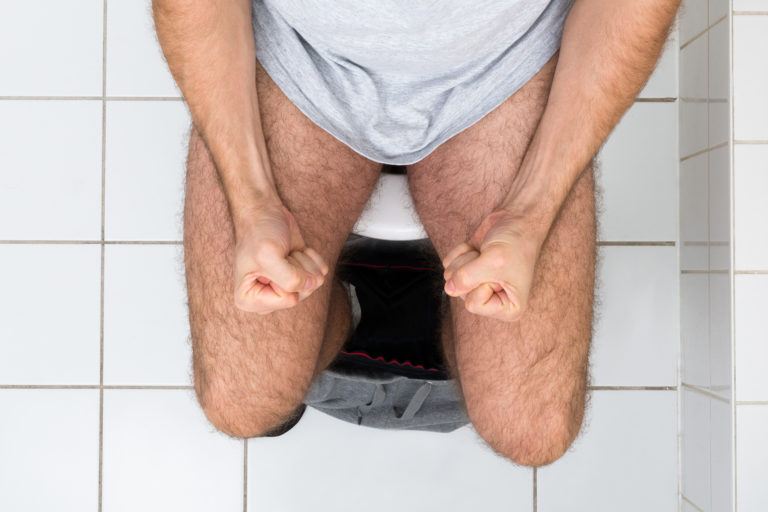 I have hemorrhoids (some people mistakenly spell the word hemoroids, which makes more sense than the correct spelling): those itchy, scratchy, painful, sometimes bleeding little bumps between my buns. But guess what, all of us have them. They’re natural, and are actually quite common (although most people don’t really talk about them).  When they flare up, you get to enjoy the pleasure of the itching and the pain, and the general grossness that can come from them. But don’t fret, there are ways to control these little monsters on your dirty bits. I’m here to tell you how.

The hemorrhoid treatments that follow are easily performed by yourself, in a bathroom, with the door locked, but first we should discuss what causes the pain.

The immediate pain and discomfort of hemorrhoids are caused by a blood vessel that has been pushed out of the dirty bits and become infected.

Hemorrhoids themselves can be caused by any number of things, but often times it’s just a matter of over exerting oneself during a bowel movement. If you want to reduce the exertion, you should eat more fiber and drink more water. Stools come out easier when they’re full and moist.

People who tend to eat lots of binding food — food that can cause constipation or create harder bowel movements — are giving themselves higher odds of hemorrhoids. Cheese, fried foods, and red meat are a few things that can cause more difficult bowel movements.  On the other hand, a high-fiber diet can help keep you more regular.

Get Rid of Hemorrhoids Temporarily and Quickly

Using an ice pack on the area that is giving you troubles will help a bit, and ease some itching. While that’s working it’s magic, you can keep on reading to see what else can be done.

Don’t strain on the toilet.

Pressure is why hemorrhoids are giving you troubles in the first place, and if’n you’re pushing on the pot, they’re going to get worse. If you find yourself having to push a lot, increase your water intake, or try to eat more high-fiber foods (they keep you regular). Nature will take care of the rest.

Water is the secret remedy for so many things, and it plays a huge part in relieving and preventing hemorrhoids.  Try to drink 100 ounces of water a day — that is a lot, but if spaced-out throughout the day, it actually seems quite natural.

While you are at it, try to cut back on the alcohol and coffee, because both of those things have an effect of dehydrating you without you realizing it!

The same position for an extended period of time can irritate the hemorrhoids.

Sitting or standing, and not moving, can cause a good deal of issues. So if you’re not keen on getting up and down all day as if you were at a Catholic mass, then you may want adjust your schedule a bit. You don’t want to sit on those donut cushions too long, as those will put the pressure on the veins causing the issue in the first place, and that’ll enrage the hemorrhoids.

As with so many health-related things, regular activity — even a daily walk — can play a part in reducing the chances of hemorrhoids.

Fiber, like water, will help your stool, and thus your hemorrhoids.

The more fiber, and the more water, the easier it’ll be to pass things through to the toilet. Because it’s easier, there’s less strain on the veins, and the less train, the easier it is to deal with the hemorrhoids.

High fiber foods include fruits, vegetables, beans, and nuts. In other words, just one more reason to eat the things you should already be eating for so many other reasons.

Vasoconstrictors are what doctors prescribe most.

These are the pain relieving creams that will help the symptoms. There’s no cure, per se, because everyone has the bits that will become hemorrhoids. So, you’d use these creams to help calm things down. There are several respected brands of over-the-counter ointments, including the time-tested Preparation H and Tucks. For relief for excessive itching, look for an ointment that contains hydrocortisone. You can order Preparation H from Amazon.

While you can chip away at the hemorrhoids through lifestyle changes like eating more fiber and drinking more water, people have given rave reviews to going all-in and just adopting a diet and some lifestyle modifications that can gradually eliminate the hemorrhoids.  The one we like best is the Hemorrhoid No More plan, by the Certified Nutrition Specialist Jessica Wright.

Ms. Wright puts you on a program, including dietary adjustments, that can get rid of the hemorrhoid symptoms in 48 hours and treat the root cause of your hemorrhoid problem in 30 to 60 days.  Worth a try, especially considering that her dietary adjustments will be good for your overall health as well.

Obviously, as we’ve discussed, you can’t really get rid of hemorrhoids per se. You can treat the symptoms. However, when push comes to shove, there’s an issue where there’s a new type of surgery called hemorrhoidectomy. If a doctor thinks you need it, they’ll talk about stapling shut the veins that are causing the most pain. Then, through the process of oxygen starvation, that dies and then no more pain from that specific vein. Check with your doctor, though, as any surgery involves pain, danger, and requires some good solid medical advice.

Cocoa Butter, made from cacao beans, is a natural protectant for skin, and makes a perfectly soothing cream for hemorrhoids. Though it does nothing to medicate, it does keep the spicey food you keep eating from burning your dirty bits.

Lanolin, or Wool Grease, made from animals that produce wool, is another great protectant that is all-natural protectant (unless you count the steroids used to make bigger and better livestock). But remember, with all protectants, to keep the application of said cream to the outside of the dirty bits and the walls of the dirty bits–no further.

Warm Baths will often times help to ease the discomfort of hemorrhoids. And heck, who doesn’t need an excuse to take a nice, warm bath? Or, head to your local health club and take a dip in the hot tub.

Witch hazel. Witch hazel is a liquid astringent that can help shrink blood vessels to reduce swelling and bleeding in the rectum and anus. Soak a cotton ball in the liquid and gently apply it to the affected area up to three times a day until the symptoms begin to go away. Witch hazel creams or lotions work just as well as the liquid. For extra cooling relief for burning and itching, keep your bottle of witch hazel in the refrigerator. You can get pads from Tucks at Amazon here.