Of all the pests we’ve studied and written about, none is more ubiquitous than the cockroach. Cockroaches have been with us since the dawn of humanity–the pesky roommates we couldn’t get rid of no matter how hard we tried. And we’ve been trying. Getting rid of cockroaches is no easy thing. There’s a reason scientists say one of the only creatures left after a holocaust will most likely be the cockroach. To say the cockroach is resilient is like saying water is wet–obvious and understated. But that’s not to say getting rid of cockroaches is impossible. It might take some time, but the best ways to control cockroaches are really quite simple and generally apply to all species of cockroach. However, there are some subtle differences in the approaches to cockroach control based on the species…we’ll get to those.

There are roughly five common pestiferous species of cockroach in North America, and each species varies somewhat in preference to environment and appetite. The German cockroach, for example, is as comfortable indoors as it is outdoors and will eat just about anything; while the smoky brown cockroach prefers to live outdoors and is considered primarily a vegetarian. Below we will provide for you a clear picture of the possible cockroach that is infesting your home, tell you a little bit about its behavior, and then offer pest control suggestions specific to that species of cockroach.

But before we begin, your first step should be to set out some sticky traps (like the ones we use for mice) around your house. This will accomplish two things: first, it will help you get a better look at the roaches that have infested your house, so you can identify them, and second, it will give you an idea of where the “high traffic” areas are for cockroaches in your home, so if you choose to use roach sprays, roach baits, or roach poison, you’ll know where to apply it.

Why get rid of roaches?

You don’t have to be a rocket scientist to figure out why people want to get rid of cockroaches. Cockroaches leave saliva and excrement on your dishes, your cookware, your countertops, and any other surface they cross. But it’s not just the food poisoning, dysentery, and diarrhea that cockroaches may cause. There’s also the threat of childhood asthma.

According to a study published in the Journal of Allergy and Clinical Immunology, cockroach allergens, which come from the saliva, feces, cast skins, and dead bodies of cockroaches, can exacerbate asthma in children–more so, even, than dust mites or pets.

Getting rid of cockroaches isn’t just about sanitary standards, it’s about your child’s health, too.

Killing cockroaches is easy. You just stomp on them, right? Wrong. Besides the obvious mess you’ll leave behind, cockroaches (when they’re hungry enough) will eat the remains of other cockroaches, so squishing them isn’t the best way to do it.Kill cockroaches by dehydrating them. This doesn’t sound easy, but most roach killing sprays first abrade the exoskeletons of the roach and then deliver a neurotoxin to turn off their brains. Most roach-killing dusts, like boric acid (borax) also abrade the exoskeleton but do not deliver any other chemical; they simply allow the roach to dehydrate and die of thirst.So, how you kill a cockroach depends on how long you want them to suffer. See the section below about roach poison and roach baits to help you make a more informed decision.

Identification and Top ways to Get Rid of Cockroaches The American cockroach prefers moisture and warmth, which explains why it is so commonly found in boats, bathrooms, basements, and sewers.

The American cockroach is one of the larger species of pestiferous roaches in the U.S., but luckily for you it is less common in homes and apartments. However, if you’ve identified the American cockroach as your problem pest, perhaps the best way to get rid of the American cockroach is to cut off access to your home and reduce the amount of residual moisture in your home. Caulking cracks and crevices in your foundation as well as in your baseboards and walls in the first floor of your home is paramount. Using a dehumidifier to keep relative humidity to a minimum will also help deter American cockroach populations from getting out of hand. Something like the Eva-dry at Amazon may work, but you’ll want to probably get something a bit larger if you’re going whole-home instead of closet or bathroom. Dusting those areas where you notice roach traffic most often with boric acid (borax) will help to get rid of roaches that are still troubling you. 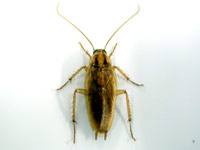 The German cockroach can thrive in just about any environment and is less reliant upon moisture than other roaches.

For these reasons, the German cockroach has become the most common pest in the American household, far beyond any other cockroach in North America. The German cockroach has one weakness and that is its preference for warm air (like that of its native North Africa). Heating vents and furnaces are some of their most common hiding places. Sanitary standards are, of course, one of the most effective ways to get rid of German cockroaches, but simply putting out roach baits that use boric acid as their active ingredient will usually take care of the problem. Following the natural roach control regiment in the right sidebar is often your best recourse for controlling German cockroach problems. 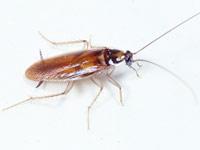 The brown banded cockroach, like the German cockroach, prefers warmer, drier climates, thus making them a problem in the upper floors and attics of your home.

The brown banded cockroach is a notorious eater of clothes, fabrics, glue, and other starchy substances, which is why you’ll often find clusters of them in shelf spaces and warm, upstairs closets–especially bedrooms. To control brown banded cockroach populations immediately, you may want to wait until dark, then turn on the lights and follow the skittering roaches to their hiding places, and spray with a pyrethrin- or permethrin-based roach spray. Follow this up by vacuuming your rooms thoroughly, using a crevice attachment to suck roaches and their eggs from their hiding spots. Then dust with boric acid powder in those inconspicuous places. Caulking cracks beneath baseboards and around cabinets and shelving will stop brown banded roaches from returning. 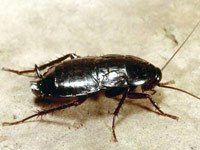 The Oriental cockroach is less common than either the German or brown banded cockroach and prefers very wet environments.

You will often find the Oriental cockroach feeding on decaying food, in garbage containers, and anywhere else food has been dropped. These particular roaches are considered the perfect vector for food borne illnesses because of their appreciation for rotting food or leftover scraps, rather than starchy foods and sugars. Because of the Oriental cockroach’s affinity for sewers, drains, refrigerators, basements, cellars, and any other cool, moist environment, your best option for comprehensive roach control is to keep your home warm and dry. A dehumidifier set to high in a basement or on the first floor of your home will help take much of the moisture out of the air, leaving the floors and other surfaces dry enough to dust with boric acid as a secondary precaution. You should replace all garbage containers with sealable bins, take out the trash regularly, and avoid leaving scraps of food or compost heaps near your home. This also will help get rid of other pests besides cockroaches.

The smoky brown cockroach is primarily an outdoors roach that will wander indoors only if there is a food source.

The smoky brown cockroach prefers plant matter as its primary food source, so you will often see these roaches in gardens and greenhouses–rarely in areas where humans tend to dwell. Because of the smoky brown cockroach’s love of rotting fruits and vegetables, it’s a good idea to begin a roach control regiment by cleaning away any organic matter from doorways, windowsills, and edges of buildings. Ground level walls and foundations should be inspected and caulk should be used to seal any cracks that are observed. You may even want to consider lining the perimeter of your home with an organic desiccant like food grade diatomaceous earth.

Determining which poison or bait to use comes down to the question of how large your problem is. If you’ve laid out sticky traps and they’re getting completely covered, or if you see cockroaches during the day on a regular basis, the chances are you’re dealing with a rather large cockroach population. Cockroaches only feed during the day if the population is too great to support a strictly nighttime feeding schedule.

If you have a large population of cockroaches you’re going to want to use roach poisons, dusts, and sprays.

Dusts and sprays are considered more effective for large cockroach infestations than baits because they not only cover a larger area, but there is no need to lure the cockroach to the poison itself. Many roach poisons, dusts, and sprays are what we call desiccants. A desiccant doesn’t need to be ingested to take effect. Desiccants basically scratch the exoskeleton of the cockroach (that hard surface that keeps moisture and the cockroach guts inside), allowing moisture to seep out slowly–eventually killing the roach who comes into contact with it. It’s not a quick death, unless of course the dust or spray you’re using contains a secondary ingredient like a neurotoxin to kill the roach more quickly. Such sprays and dusts to be considered are Raid’s line of roach and ant sprays, Drione Dust (which uses silica aerogel to abrade the exoskeleton), Shellshock (which uses diatomaceous earth to dehydrate the insect), and Diacide (diatomaceous earth + pyrethrin). Boric acid, or borax, is also considered a desiccant.

There are, of course other poisonous sprays and dusts that you can use, but those insecticides that use desiccants are considered the least harmful to humans and pets.

If you’re having trouble with just a few roaches, then roach baits are probably your best option.

They’re easy to keep out of view, and they’re quite effective at keeping cockroach populations at a relatively unnoticeable level. They’re also good for taking care of scouts who may have wandered indoors looking for a better place to eat and lay eggs. Almost every cockroach bait uses boric acid as it’s active ingredient. Examples of such products would be: Alpha 3 Roach Baits, Niban, Triad Granule Bait, and It Works Roach Killing Stations. These roach bait options are best for dealing with roaches in houses where either pets or small children are present. Amazon has niban in a 4lb shaker for a reasonable price.

Roach foggers are effective, but you have to assume that your home will be covered with pyrethroids–a family of synthetic insecticides that may or may not be carcinogenic, depending on who you ask!

Wash everything with soap and water.

Clean your entire apartment or living space down to the very last surface. This can be done in an ecologically-sound manner by using products made by companies like Ecover and and Seventh Generation. These companies provide cleaning products for just about every surface and situation.

Caulk any cracks or gaps between pipes (gas and water), walls, baseboards, cabinets, and countertops.

Sealing these areas will give cockroaches fewer places to hide, and when cockroaches have nowhere to hide, they’ll find somewhere else to live.

Weatherstrip windows and doors to prevent the migration of cockroaches from outdoors to indoors.

Mending any broken or torn window screens is also a good idea.

Store your food and garbage in sealable, roach-proof containers, making sure to take your garbage out on a regular basis.

You know, before it starts to smell like crap. For the food, we’d recommend Rubbermaid Modular containers sold at Amazon. They’re stackable!

These include places like behind cabinets, your refrigerator and oven, and any other nooks or crannies where children and pets may not be able to reach. Amazon sells Boric Acid Roach & Ant Killer if you want to try this option.