Multicolored Asian lady beetles congregate in huge numbers. The look like the ladybugs we remember from our childhood, but are much more invasive and less desirable.  Luckily, those huge numbers of bugs generally don’t chew or burrow into housing materials or human possessions, and they don’t carry diseases or bite (much). But did I mention that they congregate in huge numbers clogging up window screens, making life unpleasant, and some smell horribly when you squash them? That’s why you want to get rid of them.

Benign though they may be, it’s unpleasant seeing so many bugs in one place, not to mention being occasionally dive-bombed by hard little insects or finding them meandering over your salad or floating in your mojito. Plus, when you startle or squish them, you discover their one destructive power: it’s called reflex bleeding, and it involves emitting a foul-smelling yellow substance from their leg joints. Outdoors, this makes them less palatable to predators, but indoors, it can stain surfaces or excite allergic reactions. If the fact that they congregate in huge numbers wasn’t enough to convince you, reflex bleeding is another excellent reason to keep Asian Lady Beetles out of your home — as hard as it may be.

Where Did All the Asian Lady Beetles Come From, and Why Are There so Many?

Unfortunately, as with so many things, the original intentions were good.  We imported Asian Lady Beetles from — you guessed it — Asia.  We wanted them to help control native pests in our greenhouses.  This was nearly a century ago.

But the beetles quickly escaped the greenhouses and proliferated like crazy.  Their rate of expansion and invasiveness was for a long time a thing of curiosity.  Then, a study published in the Science magazine shed some light on the beetles’ incredible virility.  The beetles appear able to infiltrate native pests with fungus-like parasites, which causes the natives to die and the beetles to take over the area.  They begin total domination of the food supply, and expand at will.

In short, they are not going away anytime soon.

What are Multicolored Asian Lady Beetles?

The multicolored Asian lady beetle is neither the lady bug–native to America–nor is it the Japanese beetle. Its scientific name Harmonia axyridis, is a lot like lady beetles native to North America. They are similar, though not identical, in appearance, and both are helpful in getting rid of aphids and other small garden pests.

The most significant difference between them is that while North American ladybugs spend the winter outdoors, Asian lady beetles have evolved to hibernate in light-colored cliffs in their native East Asian habitat. Transplanted here—intentionally by agricultural scientists as more aggressive aphid-eaters than our native lady beetles, and accidentally in the course of global commerce—Asian lady beetles are drawn to overwinter in buildings instead.

If you see a lot of ladybugs gathered on or in a building, you can assume they are multicolored Asian lady beetles. If you want to positively identify them, look for the distinctive black “W” or “M” mark just behind their heads, which native ladybugs don’t have. A multicolored Asian lady beetle can have any number of spots, or none at all, and can be any color from red to yellow. Hence the name.

Inspect the outside of your house for cracks and gaps in the walls, siding, or foundation, and fill or repair any you find that are wider than 1/16 of an inch. Eliminate spaces around doors and windows, and don’t forget to caulk around cables, pipes, and hoses that enter your house from the outside. Asian lady beetles don’t reproduce indoors, and are only interested in your house as a warm place to spend the winter. They usually start searching for a place to hibernate in October, so if you have your house sealed against tiny intruders by late September, they’ll be forced to overwinter in the neighbors’ walls instead.

Screens are an important defense mechanism against Asian lady beetles. Make sure you have them on all your windows, bathroom and kitchen ventilation fans, and attic vents. It’s a good idea to check these in the late summer or early fall for holes, gaps, or tears, and repair or replace damaged screens before the Asian beetles can take advantage of them.

If you find tears or holes, patch them up.  Doing so will help you avoid other pests, too, like boxelder bugs and even mice.

The patch we like is a ScreenMend.  It comes in small, 5 inch by 7 inch sheets, and is large enough to patch most holes.  It tends to stay on longer than the screen repair tape which can come off in certain conditions.  Find ScreenMend here.

Paint Your House a Dark Color

If you really want to keep Asian lady beetles away, you might consider changing the color of your house. The beetles are most attracted to buildings that are light in color, especially whites and yellows, so painting darker colors over your outside walls and trim would make them a less attractive landing place. It’s possible that this would be a tiny overreaction to a basically harmless insect, but I’m not here to judge.

Sealing cracks and gaps in the walls inside your house will keep any Asian lady beetles that manage to sneak into your wall cavities from accidentally exiting into your living space. Since Asian beetles spend most of their time in your home hibernating out of sight, you’ll often see them in the spring, when the weather is warm enough that they’re looking for a way outside. They don’t actually want to be in your bedroom anymore than you want them there.

Don’t just focus on the interior — the exterior is probably more important.  If a bug gets into your wall cavity, it can live there for a long time and come out months later.  Inspect the area around doors and windows, and use a bug-proof caulk to patch smaller holes….. and steel wool and caulk to patch larger ones.  This will have a positive bi-product of getting rid of mice, too.

Our favorite is probably the Gorilla Paintable Caulk, here on Amazon.  Caulk, let dry, and paint over it.  It creates a nice barrier. 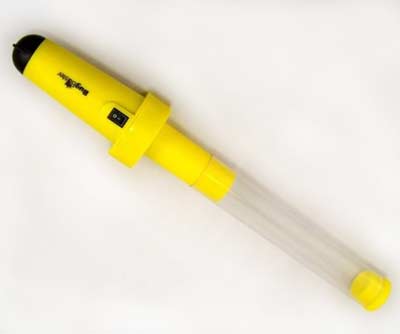 Our secret weapon when it comes to bug infestations indoors is a simple vacuum.

When you do see Asian lady beetles indoors, the best method of getting rid of them is to simply vacuum them up, especially using the hose attachment. Smashing, swatting, or even sweeping them will trigger reflex bleeding and leave yellow stains on your stuff. If you would rather release the Asian lady bugs outdoors than have them die inside your vacuum cleaner, you can slip a knee-high nylon stocking inside the hose attachment on the vacuum cleaner and secure it with a rubber band around the opening. The suction will pull the beetles inside the stocking without killing them, and you can take the stocking outside to humanely release the insects.

There are bug wands sold, like this one on Amazon, that do the trick and are less cumbersome than bringing the vacuum out.

Chemical warfare is not the most effective way to deal with an Asian lady beetle infestation. Fogging or spraying indoors will kill only a minimal number of the beetles because the majority will be hiding inside your walls or crawl spaces, where the pesticide can’t reach them. What fogging and spraying will do is leave a bunch of nasty chemicals to circulate in your closed-up house all winter. Once a population of Asian beetles has gotten into your house, your best option is to vacuum up any beetles you happen to see and wait for the rest to leave on their own in the spring.

Then, when fall comes again and you’re busy fortifying your house against another invasion of Asian lady beetles, you can use insecticides as an additional protective layer. In this application, timing is crucial: in late September, just before the beetles start looking for places to overwinter, spray a residual pyrethrin-based insecticide like Demand or Demon WP on the outside surfaces of your house. Concentrate on the sunny south and west sides of the house, and around possible entry points like windows, doors, and soffits. Since Asian beetles often fly to their hibernating places from a distance, spraying your yard or trees won’t noticeably affect their numbers. Just apply the insecticide to the house itself, where it can play a direct role in repelling Asian lady beetles.

Disclaimer:  Using pesticides or insecticides indoors is not recommended.  People who are smarter than us have concluded that there are safer ways to get rid of bugs inside.

A light trap takes advantage of the multicolored Asian lady beetle’s affinity for light. If placed in a dark part of the house or turned on at night, the bulb in a light trap tempts beetles toward it and into a jar. The beetles can’t escape from the jar and remain alive inside it until you either empty it outdoors or fill it with soapy water to kill the insects. Instructions for making your own light trap are easy to come by, or you can buy one. Some commercial versions include pheromone bait as an additional attractant for these group-loving insects. You can get this Dynatrap pesticide/odor free trap at Amazon.

Camphor and menthol have been shown by some studies to repel multicolored Asian lady beetles. They reportedly work well until they evaporate, which happens relatively quickly. This makes them less practical than other repellants, but for short-term control, or with repeated applications, they may help. If you’re worried about evaporation, then Amazon sells Camphor Block tablets that will last longer.

Glue traps can be placed in windowsills and other places where Asian lady beetles are commonly seen. This kind of trap is simple: just adhesive on a cardboard sheet. Any insect that walks over it gets stuck and ultimately dies. When the sheet fills up, you can just throw it away.