If you care at all for your lawn the last thing in the world you want to see is large patches of brown withering death. Too bad. It’s bound to happen to all of us from time to time. One of the only things you can hope for is that the brown patches are not due to the presence of grubs, because otherwise you’re probably gonna have to resign yourself to spending your summer with an ugly lawn. Worse is when skunks/raccoons start digging up the lawn to get at the white tastiness. In the south, armadillos are especially known to dig for grubs, so getting rid of grubs is also a way to get rid of armadillos. Not that it’s impossible to get rid of grubs. It’s not even all that difficult. It just might take awhile. But take heart: if it’s white grubs, you’ve at least got a nice supply of fish bait for the summer.

The lawn grub is relatively easy to identify. It’s pretty much the only big, fat, fleshy, squishy, “c”-shaped critter lurking around your soil. I actually shouldn’t say “the” lawn grub. Turns out any grub could be the larvae of a number of different beetles. Most likely it’s the vile offspring of the June beetle (Phyllophaga sp.), the European chafer (Rhizotrogus majalis), or, most likely, the Japanese beetle (Popillia japonica). The Japanese beetle grub is the one of greatest concern here. It was first detected in the United States in 1916 and has plagued us since. The grubs are notorious eaters of grass roots. This is why you end up with big ugly patches of dead brown grass. Along with killing your grass, they also make lawn pest control more difficult by luring in other critters like skunks, raccoons, armadillos, and moles, who tear up your lawn looking for them. So, if you’re looking to salvage at least a little bit of your lawn, read on for some tried and true methods of getting rid of grubs. 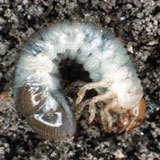 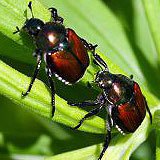 Oval-shaped, 0.3 – 0.5 inches long, metallic green head and thorax, metallic brown abdomen, 5 white tufts of hair along each side of abdomen, two white spots on back end of abdomen.

There is a very simple method for this: pick a one-foot by one-foot patch of your lawn where the brown dead grass meets the nice green grass. With a shovel, cut three sides of the square and pull the hunk of sod back. If the brown part rolls away easily, the roots have been eaten off and you’ve probably got grubs. Count any grubs you see while you’re at it. If you’ve got more than five, you’ve got a problem.

This natural grub killer works slick for both Japanese beetle grubs and European chafer grubs. Beneficial nematodes are microscopic worms that feed on grubs by entering them and transmitting a bacteria that breaks the grub tissue down into something more palatable. The nematodes are applied with a sprayer and are completely safe for people, pets, earthworms, and most beneficial insects. This stuff is easily purchased from gardening stores and online garden supply catalogs, even Amazon sells beneficial nematodes.

Break out the Milky Spore.

Milky Spore is actually a brand name for the spreadable bacteria Bacillus popillae. The beauty of this stuff is that it’s host specific. It only kills the grubs and won’t bother beneficial invertebrates like spiders, worms, bees, insects, pets, or people. Application is simple. You can either sprinkle it on dry or spray it on with a hose attachment. The best times to apply are spring and fall, but it can be applied any time the ground is not frozen. Once established in your lawn, it can last 10 to 15 years. Getting a 20lb bag from Amazon is a solid way to start establishing this helpful bacteria.

I know it goes against most people’s ideals of proper lawn care, but it’s best to keep your lawn at least two inches long. Japanese beetles don’t like laying eggs in long grass. It’s also a good idea to over-seed your lawn both in the spring and the fall. Nice thick grass is also a turnoff. Fertilize your lawn once in the spring, once in the fall, and, if you have them available to you, leave a nice layer of dead leaves over your lawn for the winter. That’ll help with a nice bit of mulch in the spring.

Grub eggs require moisture to hatch. Unfortunately, there’s a very fine line between under-watering your lawn and supplying enough moisture for the eggs to hatch. I’m not saying to never water your lawn. You don’t want all of your grass to die. Just do it sparingly. If your lawn can handle it, try to avoid watering altogether, especially in the spring when Japanese beetles are looking for somewhere to lay eggs, and in late summer when the grubs are actively feeding. Otherwise, instead of frequent light watering, water deeply but sporadically.

Birds eat bugs. Do what you can to entice them to your yard. I would recommend concentrating on robins. Place a bird bath (or six) in your yard and put up nesting shelves. Put up a bird feeder, as well. Robins won’t eat seed but many seed-eating birds eat bugs, too.

I know it sounds like a waste of beer, but this is supposed to work pretty well. Grab a container you don’t really care about (old bowl, Cool Whip, etc.). Dig a hole just large enough so that the lip of the container ends up at ground level. Pour some beer in it, wait until morning, and examine your catch.

As I said up at the top, the grubs from Japanese beetles have been plaguing us since at least 1916. With that in mind, it’s no wonder that we’ve come up with numerous products to kill grubs. I know, I know. It’s very sad to have to kill such a cute little critter. Ha! Bring on the napalm! The most highly recommended grub killer that I’ve run across (besides Milky Spore and beneficial nematodes) is called Merit (active ingredient imidacloprid). It’s a wettable powder that is designed to be sprayed on your lawn. Look also for Sevin (active ingredient carbaryl). It’s available as a dust, a liquid for spraying, a granule, and in a ready-to-use formula. Mach 2 (active ingredient halofenozide) mimics hormones and causes grubs to shed their exoskeletons too early. Death ensues. Scotts GrubEx and Ortho Grub B Gon also use halofenozide. Neem oil works in a similar manner. The difference is, while it does mimic hormones and disrupt molting, it makes otherwise delicious plant roots taste bad to the grub. It’s also natural. Or try Dylox (active ingredient trichlorfon), which works by screwing with the grubs’ nervous systems.