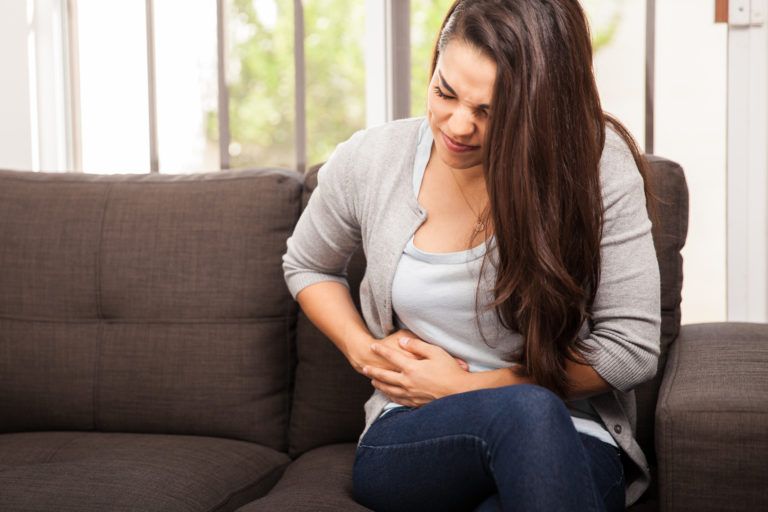 There was a time in my life where on any given night I could be found propped up with pillows on a bed, bottle of opaque pink liquid in hand (shaken, not stirred), wondering how I was going to ever sleep again after waking up to a burning pain in my abdomen and a pukey taste in my mouth. During the day I was constantly chewing on those chalky white tablets—before eating and after. They were just a part of everyday life. Indigestion is a horrible thing to live with.

Heartburn and acid reflux are just two of the symptoms of indigestion, also known as dyspepsia, but there is more to it than that: Some other problems associated with the condition are bloating, gas pains, abdominal tenderness, and loss of appetite. I always assumed the problem was something I inherited genetically—indigestion is a common problem in my family. But once I started doing some investigating, I found that (at least for me) the indigestion was completely eliminated when I started cutting certain things out of my diet. The culprits, in my case, were soft drinks containing corn syrup and sweet, cake-type foods. I switched to diet cola and quit partaking in birthday cakes—problem solved. I was lucky in that my solution was fairly simple. It’s not always that easy, and indigestion can be a sign of serious health problems, so if these basic guidelines for getting rid of indigestion don’t work for you, please check with a doctor.

Best Ways to Get Rid of Indigestion

Get rid of indigestion with diet changes.

The most common causes of indigestion, in those of us under fifty-five years old, are diet related. Either you are eating something you shouldn’t be or too much of something that would normally be easily digestible. I have to say that I still occasionally get indigestion when I eat too many rich foods or if I’ve imbibed an inordinate amount of beer. I know it will happen; it’s a choice I make. If you experience indigestion, think back on what you have been eating and make a note of it. Then you can add extra fiber to your diet to compensate or choose to avoid those things in the future—unless they are really, really tasty.

Lifestyle changes can help you get rid of indigestion.

It’s funny: the lifestyle things that will help you get rid of indigestion are the things you should be trying to work on anyway for general health. Lose the gut, quit smoking, don’t lay around all day, and get some regular exercise. All of these things promote better body efficiency; obesity and smoking can actually cause acid reflux, not to mention a hundred other health problems. Another preventative thing you can do is to change the way you sleep: don’t eat within three hours of bedtime, and try to incline your sleeping surface to help keep those stomach contents where they are supposed to be.

Over the counter medications are good for temporary indigestion relief.

There are a number of medications available for you to buy without a prescription: Antacids.These can be found just about everywhere and come in liquid and tablet form: Pepto-Bismol, Tums, Rolaids, etc. They can be effective for temporary relief of minor heartburn, but probably won’t help things like gas pains or bloating. They work by neutralizing excess acid with a base, much like a science project volcano. Speaking of which, a spoonful of baking soda in a glass of water will do the trick in a pinch, but it tastes like absolute crap. Proton-pump inhibitors and H2 Antagonists. These are both drugs which, through different mechanisms—histamines or enzymes—prevent the excretion of acid into the stomach. They are very effective for the treatment of reflux and can improve the healing time for those of us suffering from ulcers. Look for names like Tagamet, Zantac, and Pepcid.

Gas pains can often be mitigated with antiflatulents.

One of the major symptoms of indigestion is gas pains. If you are eating something that is normally associated with flatulence, such as beans or any plant in the cabbage family, pop a couple of Beano tablets, and the enzymes contained inside will break down the gas-causing complex carbohydrates into simpler sugars. A high-fiber diet will also help to keep everything moving down there. This will help to prevent pain from pressure build up. You can find Bean-o at Amazon.

Lactose intolerance and other allergies can cause similar symptoms.

Another major cause of intestinal distress and indigestion is certain people’s inability to digest particular proteins or sugars: Dairy. In the case of Lactose, most humans stop producing the enzyme Lactase within a couple years of babyhood. This makes sense, as we would naturally have stopped nursing after a year or two as we moved on to solid foods. Lactose intolerance is largely genetic and dependent upon our ancestors and their historical use of dairy products. There are several products available that will help you digest dairy products: lactose-free milk and Lactaid, for example, which contain the enzyme we need to break down Lactose. Gluten. This is a severe problem that has really been growing in concern in the last decade. Gluten is in so many things, and the only treatment for this problem is a gluten-free diet. There are several separate conditions within the Gluten Intolerance group: Coeliac disease is a disease of the intestine that causes a reaction with gluten components that ultimately destroys the sufferer’s ability to absorb nutrients from food. This causes weight loss, abdominal cramping, diarrhea, and flatulence. Wheat allergy is much like other allergies, in that a histamine reaction takes place when a person comes into contact with the allergen; however, if eaten, it causes a lot of the same symptoms as celiac disease.

How to Get Rid of Indigestion with Natural Treatments

Indigestion has probably been a problem for humans for all of our eating history. One could speculate that in the past few centuries as there has been an increase in food availability, there has been an increase in excessive eating, indigestion must have increased too. Many natural substances have been found in that time to help with this problem.

Peppermint and pepper.Peppermint along with caraway seeds have been shown in blind-studies to help alleviate the symptoms of people with dyspepsia who do not have ulcers. Black pepper helps with digestion and cuts down on the production of intestinal gas, which is often one of the causes of discomfort associated with indigestion.

Iberogast. One of the most promising natural treatments for problems with digestion and intestinal distress is a combination of several herbal extracts which is sold under the name Iberogast. This drug has been shown in clinical studies to help, and that’s rare in herbal medicines. It contains several medicinal herbs which you might consider giving a try: German chamomile, Clown’s Mustard, angelica, caraway, lemon balm, celandine, licorice, and peppermint. Amazon sells bottles of Iberogast if you’d like to try it.

Gastritis is a condition that involves an inflammation of the lining of the stomach, and it can have the same symptoms as indigestion. It can be caused by many things, but very often it is related to excessive ingestion of alcohol or other substances, such as painkillers, which erode the stomach’s mucous coating thus allowing exposure to stomach acids. Other causes include autoimmune disorders or an infection of bacteria such as Helicobacter pylori, a very common bacteria that can become a problem in the right conditions. All forms of gastritis have the potential for causing ulcers and should be treated by a physician.

Crohn’s disease is beyond the realm of everyday indigestion, though it shares many of the same symptoms. It is an inflammatory disease affecting the lining of the intestines and is a living hell for those with the misfortune of being born with it. As a genetic auto-immune disease, there is nothing they can do to prevent it.

IBS or Irritable Bowel Syndrome is another condition which shares some of the same symptoms as indigestion. This syndrome is a bit of a mystery, as there is no known physical cause for the problems, but onset is often related to a prior medical episode or psychological trauma.

Indigestion can be an indication of something really serious!

It is possible that none of these lifestyle or diet changes will help you. Rather than suffer in silence, consider visiting a doctor. There could be something seriously wrong with you. If that something is cancer, or a heart condition, the earlier you catch it, the better your chances are for surviving it. If that something is an ulcer, there are good possibilities for treatments available; this could get fixed! If you ever find yourself vomiting blood or having bloody stools, please make an appointment. That is a sign of something beyond what you can do at home.

The medications a doctor has available are mostly just stronger versions of the drugs you can buy for yourself in a drug store. But what you don’t have is the wide variety of diagnostic tests, an understanding of human anatomy, cool cameras which can scope out what’s going on down there, or the professional experience of dealing with this sort of thing dozens of times before. It can be a matter of life or death, and a visit to the doctor can give you the possibility of living a normal pain-free life.