Nothing says “spring” like dandelions poking their gleefully yellow little heads up out of the dirt and spoiling your perfectly green lawn with their persistence. Nothing says “backache” like pulling a hundred dandelion weeds either.

The dandelion weed, known to horticulturists as Taraxacum officinale, can be ridiculously hard to get rid of. Not only are they masters at propagating themselves, they’ve also got that darn taproot. That big long tuber-like projection that shoots straight down (sometimes up to 10 inches) into the dirt and makes ’em hard as hell to pull up. And if they snap off partway down and you leave even a little of that taproot in the ground, you’re gonna have a fresh new dandelion on your hands before you know it.

Remember when you were a kid, sitting in the lawn, plucking dandelions and blissfully blowing the seeds all over? You didn’t know it, but your old man was watching you from inside at the kitchen table. He was sitting there drinking his coffee, cursing, and secretly hoping you’d inhale just a little too hard, suck in a just a few of them there seeds, send yourself into a coughing fit and learn your lesson the hard way. Nowadays, he’s just glad you’ve got kids of your own who are more than happy to return the favor. Luckily, you’ve got the Internet, and it comes a wealth of information on how to get rid of dandelions without breaking your back. I’m not saying getting rid of dandelions won’t give you any back pain at all, but if you follow the advice on dandelion control in this article, you’ll have a much better time killing dandelions than Dad ever did. 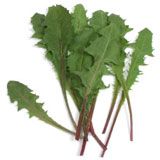 Like most things in nature, dandelions serve a purpose.  Dandelions are extremely high in vitamin A, potassium, and beta carotene. They are also good sources of vitamins C and D, iron, zinc, manganese, magnesium, and phosphorus. Dandelion leaves are often gathered and used fresh in salads, or boiled like spinach (to cut the bitterness) and used in soups and casseroles. The dandelion leaf is not the only edible part of the plant. The root can be harvested and used in stir fries or roasted and used as a substitute for coffee. While we’re at it, the heads (flowers) can even be used in wines. Some of the health benefits of dandelions are said to include improved digestion and improved kidney and liver function. Dandelion is also known to be a natural diuretic.

The dandelion is good for the pollinators in our world, like bees. The brilliant flowers help bees do their jobs, and at the same time a poisoned dandelion (via herbicide) can actually harm or kill the pollinator that lands on it.

Finally, the dandelion is one of the toughest ground cover plants around, and just may be able to grow where many other grasses and plants cannot. Because of this, they might be a good choice, actually, for that rocky, dry hillside near your house where nothing else will grow except for thistles and other weeds.

Best Ways to Get Rid of Dandelion Infestations

CGM is probably the best thing you can use to avoid getting dandelions in the first place and to keep them from coming back. CGM is a pre-emergent herbicide. This means that it keeps seedlings from taking root and taking up residence in your lawn. Besides that, it’s 100% natural and perfectly safe for yards, kids and pets. CGM is available both online and from most garden shops.

For proper dandelion weed control, spread CGM over your lawn 4-6 weeks before the growing season — which in some climates means you spread it the second the snow is gone. Since the stuff only remains effective for 5-6 weeks, you will need to reapply it several times. CGM will not kill pre-existing weeds. To learn how to kill dandelions that were already hanging out in your yard, read on.

We can’t stress enough that this needs to be applied very early in the season.  Apply it too late, and it actually becomes fertilizer for the dandelions — they will love it!

You can find our preferred corn gluten meal here on Amazon.

I know it sounds pretty straightforward, but there are a few things you should keep in mind when mowing for dandelion control. First, mow often to cut the heads off of dandelions before they go to seed. Second, set the lawn mower deck so that the grass does not get cut shorter than 2-2 ½ inches. Keeping the grass longer allows it to block light that dandelions need to grow. Third, leave the grass clippings on the ground. They act as mulch and help to prevent seeds from taking root. Finally, provide your lawn with infrequent deep waterings. It’s better for the grass, and frequent waterings are one of the things dandelions love.

The best kind of watering for your lawn happens about once a week and gets super deep, so let it go for a while.  Those frequent, 5-minute waterings only help the weeds, really.

The #1 best way to kill dandelions is to pluck them out at the root. There are many tools available that are designed to help you dig deep and pull them out at the root. Stop in at a hardware store or garden center and ask about the Dandelion Digger, the Weed Zinger Stand Up weeding tool at Amazon, Grandpa’s Weeder, or the Dandelion Terminator (this attaches to your electric drill and is shown to the left). Whatever you decide to use for a dandelion weeder, you should water your lawn before the big dandelion kill. This will soften the ground and make it easier to pull up root and all. Every time you pull a dandelion, squirt a little dandelion herbicide down the hole to make sure any root remnants get dead.

One important note about this method — our experience tells us that you need to pull dandelions early in the year, during spring or very early summer, or else the soil will get too firm and hard and pulling a weed will become difficult.  If you can get to the dandelions right after thaw when the ground is still soft, the dandelions (and other weeds) will pull out easily and you will get the whole root.  Because a dandelion can sprout from even a partial inground root segment, you don’t want to break the root — you need to get the whole thing.

If you want to know how to kill dandelions with a little less manual labor, or just want something to supplement your efforts, pick yourself up a good dandelion weed killer. First, a note about herbicides.  Some people don’t like them.  They are not good for pollinators, and according to the EPA they can runoff into the water supply if used improperly or overused.

In some cases, though, targeted and careful use of herbicides is the most effect way to treat dandelions. Some of them are designed to be squirted directly onto the little beasts, and some of them are meant to be sprinkled or sprayed over your whole lawn. Look for brands such as Round Up, Scott’s Weed and Feed (which you can get from Amazon here), Weed-Out, Kilex, 2,4-D, or Weed-B-Gone. Whatever you use, in order to give the stuff time to work, don’t water your lawn for at least three days after application.

Use as directed. Do not be one of those people who sends a bunch of herbicide into the wastewater system, or a nearby lake or river.

Above all, don’t allow yourself to be daunted by the task or to give up trying to kill dandelions too soon. If your dandelion problem is bad, give yourself a few days to pluck ’em all out. Your back will thank you. If you’re not going to pluck them and are intending to use one or more dandelion killers, follow the directions, give them time to work, and be prepared to do any required reapplications in a timely manner.

It might also require a few rounds of work. You will be shocked how a dandelion-free yard will suddenly have 20 new ones in a few days. It takes a while to get rid of dandelions, and persistence to keep them from coming back. The most effective way for you to get rid of dandelions will be for you to follow all of the steps in this section and to not get discouraged…you can do it!

Use a Natural Dandelion Killer

Vinegar is perhaps the most effective and definitely the safest dandelion spray available.

Either spray the dandelion directly, or, better yet, pull the dandelion out by the root and spray down the hole to make sure any roots that were left behind are killed. While plain old white vinegar will work, it works better to boil it down to increase the concentration of acetic acid. Otherwise, look for BurnOut Weed & Grass Killer. It’s completely organic and is made from concentrated vinegar, clove oil, and lemon juice.

It is really the acidity that kills the dandelion, so any natural, acidic chemical will do.  We find, though, that good old white or apple cider vinegar work well.  The best part?  They are dirt cheap compared by buying herbicides.  This one, on Amazon, is 64 ounces and won’t break the bank.

Salt is said to be a pretty effective dandelion killer.

Take about a tablespoon of salt, pile it on the dandelion right where it pops out of the ground, and leave it there. After a couple days you should have dead dandelions everywhere. Just be careful not to get the salt on surrounding plants.  Many plants and grasses can be damaged by salt, so it might not just be the dandelion you are killing.  Use sparingly.

These cool birds are not just for eggs anymore. While they do supply us with food, they’re also good for a number of other things, like eating dandelions. Since we’re talking about biological dandelion control, you should also consider keeping your dogs inside whenever you see rabbits in your yard. They enjoy a nice dandelion even more than chickens do.

More and more cities are allowing for homeowners to keep chickens. Be sure to check your local ordinances first, and for good measure it might not be a bad idea to be on good terms with your neighbors!